When you don’t have a bed to sleep in at night and you’re struggling just to survive, simple pleasures like watching a baseball game seem out of the question. It was certainly the last thing on one homeless man’s mind when three college students approached, holding out a small piece of paper.

Pedro Lugo, Sean Wetzonis, and Francisco Rios had originally planned to go to a Red Sox game with one other person in July. But when that friend cancelled at the last minute, they were left with an extra ticket.

The 20-year-olds had a few different options. Pedro’s dad suggested they “find a girl to take to the game.” They could also sell the ticket to earn some extra money. But Pedro had a better idea. Before the game, he noticed a homeless man named John sitting outside of Boston’s Fenway Park. Pedro asked if he’d like to join them.

“When Pedro asked him if he wanted to go to a Red Sox game, at first I wasn’t sure if he was going to get up, but then he said sure and he got up and he seemed pretty excited about it,” Sean said. 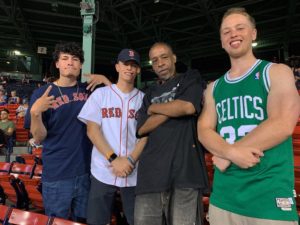 Soon, John was having an absolute blast, singing in the stands to “Sweet Caroline” with his new friends and other Red Sox fans. Sean admits he wasn’t sure how to feel when Pedro first invited John, but that nobody would have appreciated that extra ticket more.

“Everyone’s there sitting on their phones, texting and looking around. He was really immersed in the game. He was there to enjoy the game,” Sean said. For a few hours, John didn’t have to worry or stress — just cheer for his team. 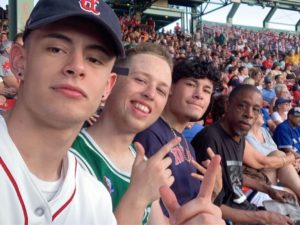 Thanks to the three strangers turned friends, John had an amazing night he certainly won’t forget. And for Sean, Pedro, and Francisco, it was the best baseball game they’d ever been to, no matter who won or lost.

Check out some of their footage of John enjoying the game below. Share to show the world how compassionate, generous, and sweet these young men truly are.