A baby taking their first steps is a huge developmental milestone moms and dads can’t wait for their little ones to reach. But for this dad, his baby girl’s first steps were especially emotional— because it was an achievement he thought he’d never be able to celebrate.

Lawrence Bakana from Buffalo, New York, has an adorable one-year-old daughter named Lawree. She was born with a deformed right leg. Unfortunately, doctors had to break the news to Lawrence that his daughter would likely never be able to walk.

So when she recently stood up, Lawrence grabbed his phone to record. He had a feeling something big was about to happen. 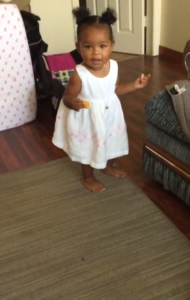 The doting dad must have been holding his breath as he watched his daughter, waiting. That’s when he witnessed a true miracle. As the video begins, we see the tiny cutie standing in her home, where she proceeds to take a wobbly first step. Clearly overcome, Lawrence can’t hold the camera steady. 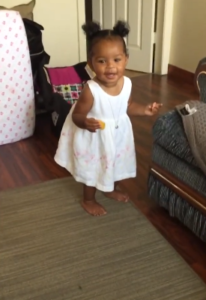 Lawree’s mom laughs in amazement as Lawrence gasps and whispers, “come on, come on” over and over. Then the happy toddler takes yet another step, to which Lawrence laughs and cries in pure joy.

At first, Lawree held onto the couch to steady herself. But as she grows more confident in her movements, she takes step after step on her own. Her dad can’t help but shriek and cry as he watches something he never thought he’d be able to see. 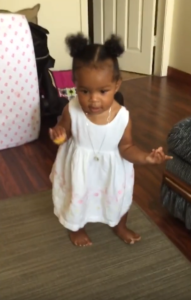 Lawree probably won’t understand the significance of what she’s just done for a few years, but Lawrence will never forget such an incredible moment. Congratulations, Lawree! Your daddy is so proud of you!

Watch below as Lawrence freaks out in the best way possible at his daughter’s first steps. Share this beautiful story with all the parents in your life.