Captain Tom Moore of Bedfordshire, England, is an international hero — in more ways than one.

Not only is the 99-year-old a veteran, but, in his daughter Hannah’s words, he’s also a “global beacon of hope.” With the novel coronavirus pandemic gripping the world, Tom decided to do something special for his 100th birthday. So in the weeks leading up to April 30, he took his walker outside and began doing laps.

As a British Army soldier, the Yorkshire native served in India, Myanmar (formerly Burma), and Sumatra during World War II.

Decades after leaving the army, he broke his hip and battled cancer. Thanks to the National Health Service workers who treated him, he recovered. Now, he says he’ll always be grateful for them — and those on the front lines of the pandemic.

“They’re doing such a magnificent job,” he told Sky News. “Every day, they’re putting themselves in danger, and they’re doing it cheerfully and they’re continuing to do that, and good for them.” 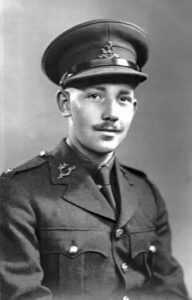 To show his gratitude, Tom decided to turn his birthday into a JustGiving fundraiser.

Starting on April 6, he set out to complete 100 laps around his garden before his big celebration, aiming for 10 a day. Word of his mission spread like wildfire, and soon people around the world were donating to his campaign.

His initial goal was £1,000, but he quickly surpassed that number. Little did he know he would bring in over £15 million for the NHS less than two weeks later! 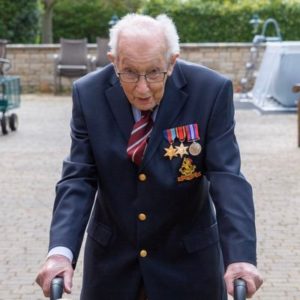 Tom has since been showered with gratitude from friends, relatives, and Internet strangers alike. Some have even called for him to be knighted!

But one of the best tributes came from the 1st Battalion of the Yorkshire Regiment, whose soldiers formed an honor guard during Tom’s final lap. 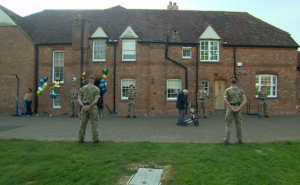 Only as it turns out, he’s not done yet! Amazed by the overwhelming response he’s received, Tom said he’ll keep walking as long as people continue donating.

“I’m so proud of him,” his grandson Benji said. “I’ve lived with him practically my whole life, I wouldn’t know anything without him, and it’s just been incredible — I can’t say anything else.”

“We class Captain Tom as one of our own, so it’s a fantastic honour to be here today to witness such an inspirational act from a phenomenal individual. Thank you Tom!” – @RSM_1YORKS

Congratulations to @captaintommoore from everyone at the MOD and the Armed Forces! pic.twitter.com/mSqZuMNjLH

What a wonderful way to give back! In addition to this incredible fundraiser, Tom gave us these wise words to hold onto: “Whatever people think, we shall get better. Things will be better tomorrow.”

Learn more about Tom’s birthday walk in the video below, and share his story to encourage your friends to thank their everyday heroes. For more joy and hope, check out the Coronavirus Good News Dashboard.