Taylor Pomilla is no stranger to being stared at and judged for her parenting skills. You see, like most kids, her son, Andrew, has good and bad days — and the bad include major breakdowns.

But Andrew isn’t a spoiled brat, nor is Taylor an unfit mother. Andrew has autism, and as such, experiences autistic meltdowns when sensory input and his emotions become too much to handle. That’s why Taylor is used to the stares when Andrew has such an outburst in public, but recently, one stranger’s reaction left her stunned. 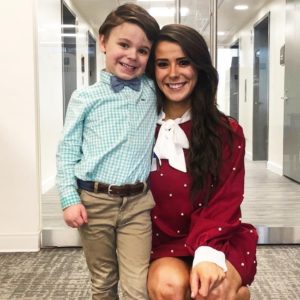 The single mom from Washington D.C. took to Facebook to share the touching story. She had just picked up Andrew from school and the two were riding home on the Metro when Andrew began acting up. He refused to stay in his seat and despite Taylor’s efforts to calm him down, started having a full-blown meltdown. Soon he was on the floor, rolling around and screaming.

“Then he starts the kicking, hitting, pulling my hair while everyone in rush hour stares on the train, most thinking I was a bad parent who had an out of control child, even though really he can’t help it,” Taylor wrote. It got so bad they eventually had to get off at the wrong station. Their stop was still another 30 minutes away, but Andrew refuses to get back on the train. All the while, passersby stared.

“At this point I am crying out of pure frustration and feeling so sad that Andrew is being judged right now,” Taylor added. 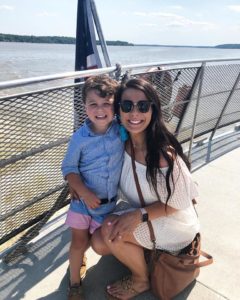 But then, Andrew’s whole demeanor changed when he saw a Metro officer walking toward them. The man, Officer Case, asked if they needed help. When Taylor explained the situation, he offered to ride the train with them to their stop.

“At this point I’m thinking he means like down the escalator to the train,” Taylor said. “He starts talking with Andrew and showing him all his gadgets. He then takes off his Velcro police badge from his vest and asks Andrew, ‘Can you be a police man with me and help me do police work on the train?’ Of course Andrew says yes.”

And to Taylor’s surprise and delight, Officer Case rode with them the whole way home! And he kept Andrew entertained the entire time. “Whenever he got off he would hold Andrew’s hand and walk with him. He sat next to Andrew as he requested on the train, acted interested as he showed him silly videos, and he even made funny faces in the Instagram face filters when Andrew asked.” 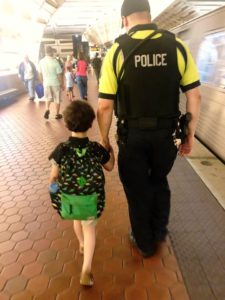 Not only did the officer’s kindness make Andrew’s day, but his mom’s as well. Though their train ride started out as a disaster, it became one of the most memorable experience’s of Taylor’s life. And she’ll be forever grateful.

“This officer COMPLETELY went out of his way to help Andrew. He honestly restored my faith that there are good people still left in the world,” Taylor said. “He deserves to be recognized for his incredible kind gesture, and especially for letting Andrew keep the police badge.”

Share this story to reminder others to help struggling parents, not stare.