The bond between a father and his children is so important and special. It can be hard for a father who is only gone for a day at work to be away from his kids, but at least at the end of the day he can come home and be greeted by their smiles and hugs.

For many families, the wait for Dad to come home can be much much longer because of his active military status. But those months of absence only make for an even sweeter reunion!

Army Sergeant Keith Howse was stationed in Afghanistan for 8 long months and separated from his wife Aja and his daughters Nataja and Jorja who were living in Germany. The Howse family were invited to a wedding back home in the Chicago area so Aja traveled to Illinois with Nataja and Jorja. Unfortunately, Keith was unable to go with them.

Before the wedding Aja decided to take their daughters to the Brookfield Zoo for a day of fun with the animals. While they were watching a dolphin presentation one of the trainers called Nataja and Jorja to come up and meet the dolphin. 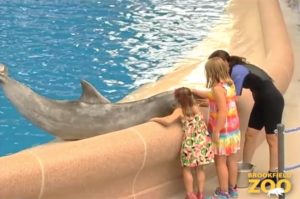 The sisters were so excited to have been picked and had no idea that Aja and the zoo had another special surprise up their sleeve for them. 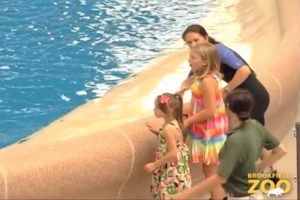 As the girls were petting the dolphin the presentation announcer asked the audience to “put your hands together and welcome Sergeant Keith Howse!” Both girls turn in shock as they see their father approaching them after months of being gone.

Immediately the oldest daughter races to Keith and jumps into his arms with her younger sister not too far behind to join in on the family hug. 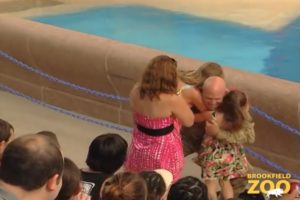 This family reunion is such a sweet moment to share and it was definitely a surprise well deserved after all of the time they have spent apart from each other.

Watch the video below to see the full reunion and share with your family and friends!