There’s a world full of breathtaking places just waiting for us to explore. But the problem with having so many beautiful destinations open to the public is that sometimes, people take souvenirs home with them.

While it’s illegal in many national parks to remove anything, it happens all the time. Travelers want a memento of their trips, neglecting to remember that swiping even just one rock hurts preservation. For example, it can disturb the nests of hellbender salamanders in Tennessee’s Great Smoky Mountains National Park.

A little girl named Karina made that mistake during her recent visit there. She pocketed a rock from Tom Branch Falls, but after returning home, she was overcome with guilt. She knew she had to make it right. 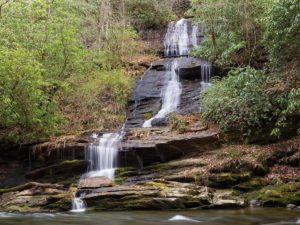 So, Karina mailed the rock back to the park, along with a sweet apology letter owning up to her wrongdoing. She also included a donation and an adorable drawing of the waterfall. 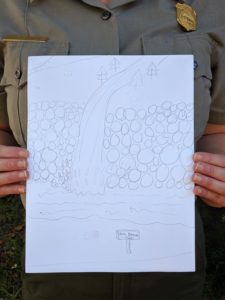 “Deep Creek was awesome! I especially liked Tom Branch Falls,” her letter reads. “I loved it so much I wanted to have a souvenir to come home with me, so I took a rock. I’m sorry, and I want to return it.” 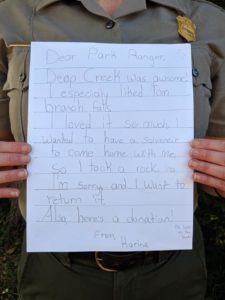 In a Facebook post thanking Karina for “becoming an amazing steward for the park,” rangers shared photos of the letter, drawing, and the rock — back where it belongs.

“If every visitor took a rock home, that would mean 11 million rocks would be gone from the park every year! The park would definitely not be as beautiful as it was before,” they wrote. “Now that you know to leave nature the way you find it, we hope you will help share this message with others. It is always a good thing to give another the chance to discover!” 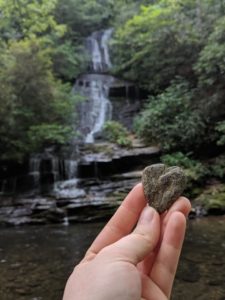 While Karina knows now she shouldn’t have taken the rock in the first place, by rectifying her actions, she’s helping to spread awareness about this issue. And the public couldn’t be more appreciative. We all make mistakes, but what’s important is that we learn from them and commit to doing better. Way to care about the environment, Karina! 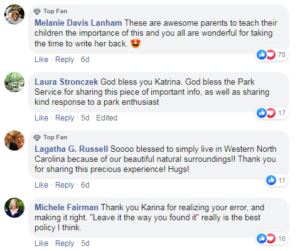 Share this story as a reminder to everyone that we can enjoy nature without taking a piece for ourselves.