You’ve seen “The Fox and the Hound,” but how about the husky and the buck?

Animals have been known to form unusual bonds, with some “adopting” other species and caring for them as they would their own young. One dog even disappeared into the Canadian wilderness for a while to pursue the most unlikely friendship. 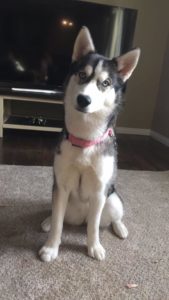 In late 2018, Rachel Howatt and her boyfriend Clint Sibbick grew worried when they couldn’t find their husky, Koda. The dog had gone missing from Rachel’s mother’s cattle ranch near Manitoba, Winnipeg, on December 20. Fortunately, Koda returned three days later and seemed perfectly fine and healthy. Weeks later, Rachel and Clint finally learned what she’d been up to during those few days away. 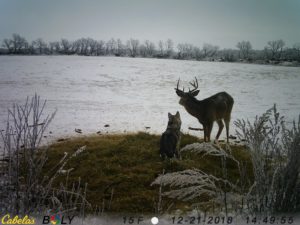 When their neighbor, Garry Suderman, got back from vacation and checked the game camera at his hunting cabin, he discovered hundreds of photos featuring Koda and her new friend: a wild deer. 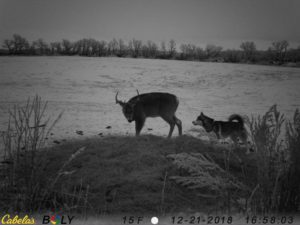 Garry told Rachel’s uncle, who relayed the news to his niece. She didn’t believe it until she saw the photos herself, after which she shared them on Facebook. In the photos, we see Koda hanging out with the buck and even curling up for a nap with her new buddy foraging nearby. 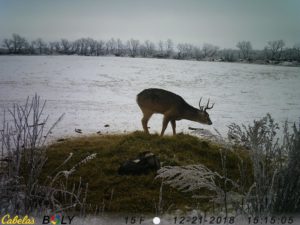 In one shot, the odd couple even touch noses. 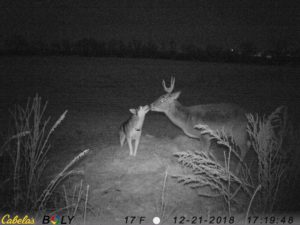 Unfortunately, the buck is visibly injured in the photos, with wounds under its eye and a broken-off antler. Garry believes Koda initially intended to hunt the vulnerable creature, but she might have felt protective toward the deer in the end. Nobody knows for sure, but another neighbor did say they spotted the two walking on a country road together (*swoon*). 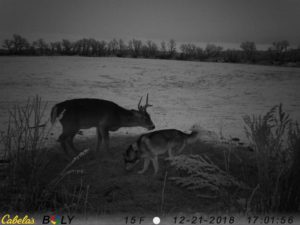 Rachel believes they’ve continued to meet up since Koda’s return. “It kind of makes sense now, because she does still disappear for a few hours at a time. I joke it’s to check up on this new friend she’s got in the valley,” Rachel said. 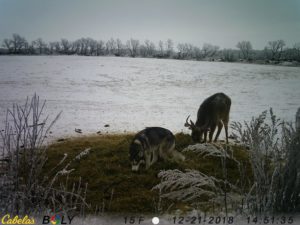 “I still can’t believe this,” she added. “Sleeps, eats, and plays around with a buck she made ‘friends’ with… WOW such an unbelievable pooch.” 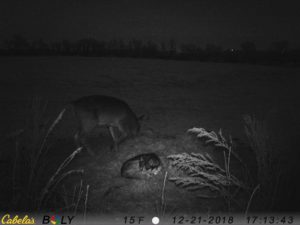 Something tells us Rachel is right about where Koda goes when she slips out nowadays. Whatever her motivation, it’s clear she loves spending time with her hoofed companion! We could all take a page out of Koda’s book when it comes to befriending those who are different from us.

Be sure to share this story with all the animal lovers in your life.