Clint Groom was filling up at a gas station in Fort Worth, Texas earlier this year when he saw something so touching, he had to get it on camera and share it with the world.

The scene opens with two men walking out of a QuikTrip, one wearing a leg brace and visibly struggling to walk. But he’s supported by the younger man, a complete stranger who just happened to see him hobbling through the parking lot and stopped to help. He slowly walks beside him, one hand placed just above the elbow and the other lightly grasping his wrist to help provide support. 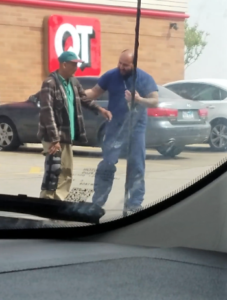 But they stop after a few seconds, and the younger man gestures at himself, then reaches down and scoops the injured man up… 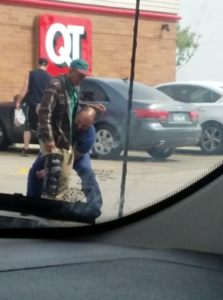 Then carries him to his waiting truck at the gas station a few dozen yards away! 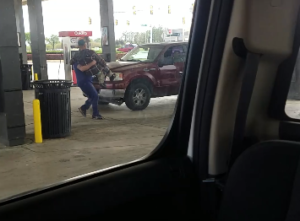 He gently sets him back on the ground and makes sure he’s okay, then goes about his business like it’s just part of the job.

That would’ve been the end of it, no recognition for this kind-hearted soul at all, if Clint hadn’t uploaded the clip to his Facebook page. The national media picked it up and helped spread the word, and once the clip went viral, it wasn’t long before this Good Samaritan was identified! 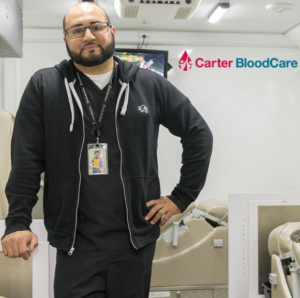 Israel Cevallos is a former Marine who now works as a phlebotomist for Bedford-based Carter BloodCare and, by all accounts, is just an all-round awesome guy with a heart of pure gold! The photo above ran alongside a 2013 article from the blood center, which described Israel as a hardworking and dedicated employee whose positive attitude “influences all he comes in contact with.”

Israel takes on every task to the best of his ability. According to his coworkers, it’s never about him. It’s always about the donors, the patients — and the mission he works for and believes in.

It appears he hasn’t changed a bit in the last five years, as shown by his actions at the QuikTrip that day. Thousands have viewed this heart-warming clip over the months, and anyone who’s chimed in with a comment not only commend Israel for helping a stranger in need, but say this is the kind of thing we need to see more of.

The world would be such a better place if we all took just a few minutes out of our busy days when we see someone struggling and lend a hand.

Watch the video below to see kindness and decency in action, and share to spread more of it!