Winning the game was the least of Ty Jordan’s concerns as he stepped out onto the football field in Sherman, Texas. But with everything he’s going through, it must have been a nice distraction.

The West Mesquite High School student has a lot to worry about. In December 2018, his mother, Tiffany, was diagnosed with stage four lung cancer. And less than a month later, she learned she had bone cancer as well. As such, the family needs all the support they can get as she fights for her life. 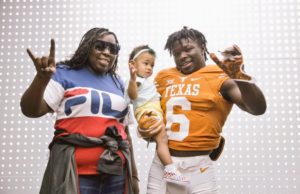 Fortunately, Ty has a lot of people in his corner, including his teammates — and even some of his opponents.

Ty used to play on a select team with Sherman High School senior Gage Smith. Now, they’re on different teams, and recently took each other on. But Gage wanted Ty to know he was there for him above everything else. So after the game, Gage approached his old friend. 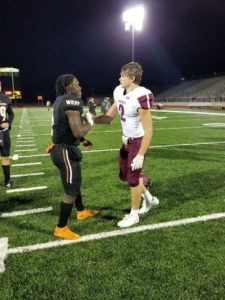 In a beautiful gesture of compassion, Gage shook Ty’s hand, then knelt down with him to pray for his mom. 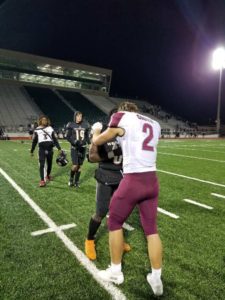 Sherman High School coach J.D. Martinez’s wife captured the touching moment and sent the photos to Ty’s aunt, Takka, who shared them on Twitter. “#GageSmith thanks for praying and speaking LIFE into my nephew, Ty Jordan, you are blessed & amazing,” she wrote.

The photos soon went viral, but Gage insists he only did what he did for Ty and his family, not attention or online fame.

“Football brings people together in so many different ways, and that was just one example of it that night,” he said. 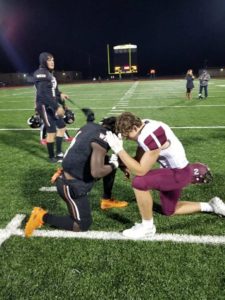 That said, his actions certainly speak to his character, and Coach Martinez agrees.

“He’s a true leader and he has compassion and it followed through for a lot of the guys on the team,” J.D. said. “It’s pretty special that kind of everybody gets to see really what he is, he’s that type of kid all the time, it’s just not in front of the cameras or anything like that, he’s like that every day.”

We’ll be keeping Ty and Tiffany in our thoughts as they face this battle together. You can help the family with medical costs by donating here. Please share this story with anyone who might want to help.