Imagine celebrating your birthday every year by giving back. That’s precisely what 59-year-old Winston-Salem, North Carolina native Bob Blackley did earlier this week. Blackley gave out $5 bills to complete strangers while standing in the middle of a busy intersection near the center of the city.  Who the person is or what they plan on doing with the cash doesn’t matter to Blackley. He gives because he can and he’s kept up this unique birthday tradition for the past 3 years. The first year he ended up giving away $700 in $5 bills, then the number kept growing, up to $750 the year after, and $800 the year after that.

He’s gotten strange looks from people who wonder if he’s crazy or if he’s trying to sell something, but he also elicits tons of smiles from people who appreciate the gesture. One man he gave a $5 bill to said he couldn’t afford to pay for medicine. Blackley was filled with content knowing that a stranger would be able to put this money towards something they desperately needed.

Blackley sees simply being able to wake up every morning as a blessing and says life is all about smiling! He’s got a great philosophy on life and the beauty of being thankful for the little things.

Blackley on his latest birthday, standing on the corner of Silas Creek and Peters Creek Parkway with his clever sign 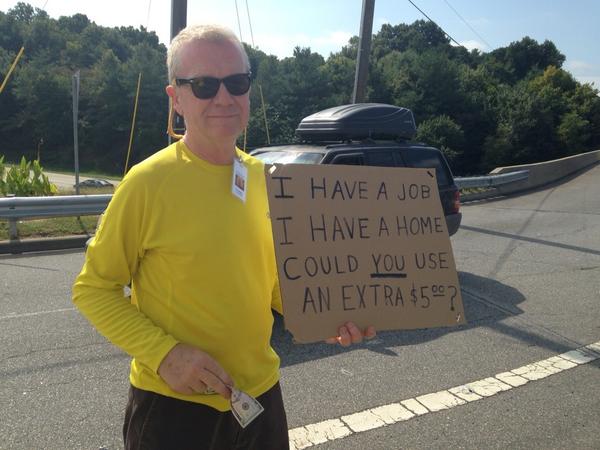