Anyone who’s taken public transportation in the Big Apple knows: anything can happen.

New York native Nazario Maisonet knows this all too well. Massive dogs can be found in tiny bags, individuals and groups break out in random song and dances, even light-hearted duels between talented saxophonists have been known to take place. Back in 2015, Nazario captured footage of an impromptu subway performance, and it’s pure gold! 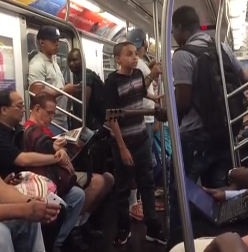 The young man singing is named Jason and his guitarist is Eddie. Together, they make some of the sweetest music we’ve ever heard on a subway train.

As the passengers mind their own business on NYC’s 2 train, Jason begins singing Ed Sheeran’s “The A Team,” which was released in 2011 and later nominated for a Grammy for song of the year. 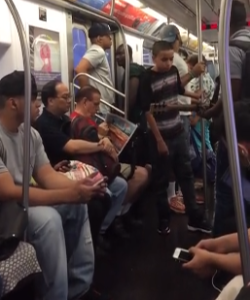 Jason’s voice rings out clear and true, and he’s completely unfazed by the sound of the train as it rumbles along the tracks and the voice booming out of the PA system. When you’re doing what you love, you’re in the zone, and it’d take nothing short of a tsunami or other natural disaster to set you off course!

Watch this young boy sing his heart out in the clip below.

Even better, we managed to track these two musicians down, and thankfully, they’re still making sweet tunes!

Rehearsal with my wing man!he gets better everyday. Please Check him out at @jason_matthewpp

We can’t wait to see what else they get up to. Share their incredible talent to brighten more hearts!