Hector Mkansi and Nonhlanhla Soldaat had no doubts about spending the rest of their lives together. But when they officially tied the knot in 2012, it wasn’t exactly the wedding they’d envisioned.

The South African couple wanted to wait. They didn’t have enough money for the ceremony and rings they wanted. With increasing pressure from the church, however, they made do with a small formal event. Since then, Hector has been waiting for a second chance to do things their way. 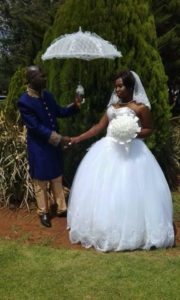 And it finally came in November, when the two stopped at a KFC in Gauteng for a bite to eat.

Hector says he, “didn’t tell family anything; wanted it to be a complete surprise with everyone,” though KFC employees were in on it. They served a paper-wrapped ring along with their food.

“Then I went on my knees with everyone surrounding us,” Hector added, and proposed to a crying Nonhlanhla once again. Restaurant patrons and staff alike cheered as Hector slipped the ring onto Nonhlanhla’s fingers. The moment was perfect. 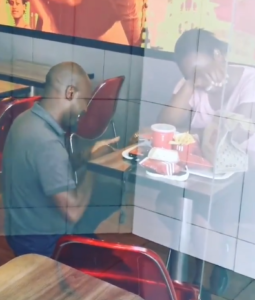 A video of the proposal went viral shortly after on Twitter, but unfortunately, not everyone was supportive. One woman made fun of Hector for popping the question at KFC. She wrote that South African men have no class. But the overwhelmingly positive response that followed completely drowned out her insults.

Looking to make things right, KFC South Africa shared the video on Twitter in the hopes of finding the couple.

Mzansi please help us find this beautiful couple, re batla ho ba blesser ? DM us any leads, there might be a Finger Lickin' Good surprise in it for you too. Batho ba Vaal re thuseng! We love love ?❤️ #KFCProposal pic.twitter.com/6bj89dtj4j

It wasn’t long before they did — or before the flood of generosity began pouring through. South Africans and companies all over the world have since offered wedding venues, honeymoon trips, jewelry, wedding outfits, and even groceries, among many other incredible gifts! And celebrities including DJ Fresh, Ami Faku, Precious the Planner, Zakes Bantwini, and Donald have also offered to perform at the wedding for free.

Hector had a small event in mind for the second time around to match his tight budget. But now, he and Nonhlanhla can’t believe the kindness they’ve been shown. In fact, they’re pretty overwhelmed by it all, but promise to let everyone know when they’ve hammered out more details for the big day.

“Thank you, South Africa. Your kindness has truly warmed us. We would have never imagined that our love story would have touched so many of you,” they said in a statement.

In the meantime, they met up at a local KFC with some of the people behind the Twitter efforts, who wrote that the couple “are besides themselves” with joy. 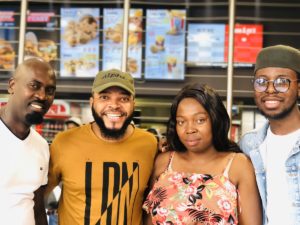 It all started with Kateka Malobola, who posted the video in the first place. He could have never predicted such a beautiful celebration of love between two people, though he is pretty amazed by it all.

“It’s not even about the video, it’s about … I’ll call it love,” he said. “The man … I’m not as brave as he is. He went down on one knee in front of everybody at KFC. Everybody came running from outside that heard the screams from the cashiers and the patrons … and it’s genuine love.”

Congratulations to Hector and Nonhlanhla, who now have more than they know what to do with! We can’t wait for you to get the wedding you’ve always pictured.

Share this story to continue the celebration of love.