It may have been a dirty job, but someone had to do it.

Two 19-year-olds, Nick Heath and Jack Donnelly, were riding their motorbikes through some mud flats outside of Sydney, Australia, earlier this week when they spotted something unusual sticking out of the mud. As they moved in for a closer inspection, they heard grunting and growling — the distinct sounds of a kangaroo in distress. 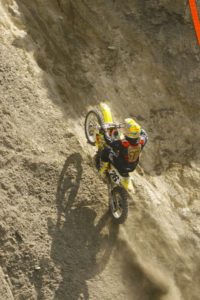 “We think he went searching for water there and it was really muddy so he got himself really stuck,” Nick speculated. And “the roo’s life was important to us so we went out on an arm and leg and got it.”

Suddenly, the outing turned into a rescue operation. They went home and returned with a length of nearly 100-foot-long rope. Nick tied one end around his waist and waded out to the struggling creature, while Jack, safe on solid ground, held on to the other. 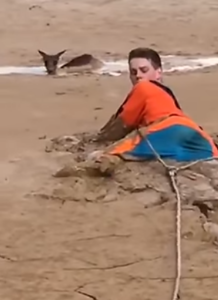 The poor kangaroo seemed to somehow sense that these men were trying to help, and thankfully didn’t put up much of a struggle as Nick plucked him out of the thick mud. 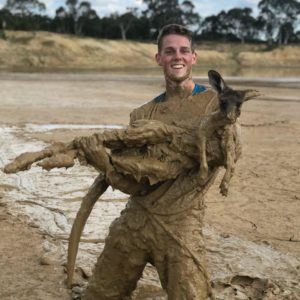 The roo’s rescuers named him Lucas, and promptly called a local wildlife organization, WIRES, to come get him so he could be treated for any injuries he might have sustained during the ordeal.

Staff there say he’d probably been trapped in the mud for quite and while because he was suffering from dehydration. After sedating him, they washed off the thick clay that coated his fur and gave him warm fluids.

Lucas is still recovering from his ordeal, but WIRES posted an optimistic update on its Facebook page a couple days ago: 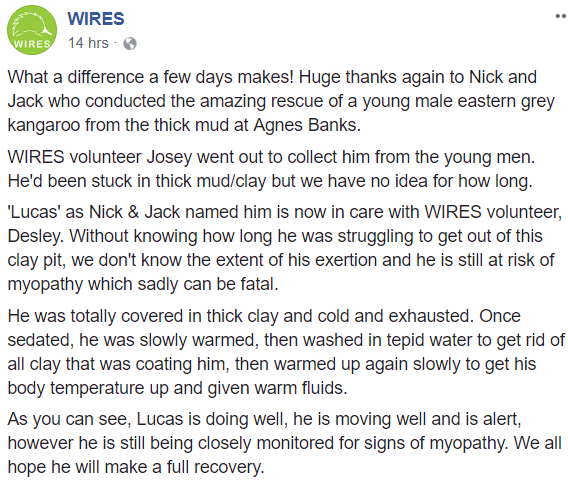 As you can see, Lucas is doing well, he is moving well and is alert, however he is still being closely monitored for signs of myopathy. We all hope he will make a full recovery.

This kangaroo would almost certainly have died if it hadn’t been for the heroic efforts of these two young men. Watch the rescue in the clip below, and share to spread thanks to Nick and Jack!