Julian Bass may not be a real-life superhero, but he can certainly become one. All he needs is a green screen and his incredible mind!

The 20-year-old is a theater major at Georgia State University. His knack for creating special effects has not only earned him thousands of fans online, but it also caught the attention of some of Hollywood’s biggest names! 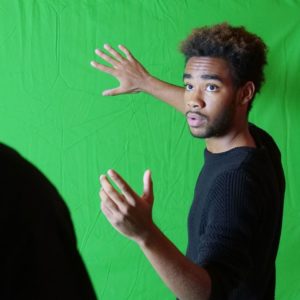 In July, Julian showed off his skills in a video uploaded to Twitter. In the clip, we see him transform from a lightsaber-wielding Jedi into a cartoon character named Ben 10. He seamlessly flips into Spider-Man, and it all happens within 20 seconds!

Millions were left begging for more, so when Julian asked for help getting Disney’s attention, his fans came through in a spectacular way.

His post quickly went viral, amazing actors and filmmakers alike. Actor Josh Gad was one of many to praise Julian’s talent. 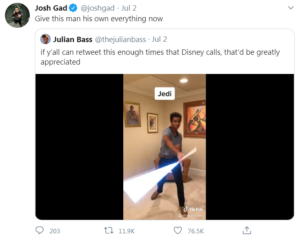 What’s more, people are calling for Julian to play Miles Morales, who is also known as Spider-Man, in a live-action movie!

Unsurprisingly, Julian is thrilled. He has been making videos for nine years now, and clearly, all that effort is finally paying off!

“I absolutely had no idea it’d get this big,” he told The Hollywood Reporter. “I mean, I’ve always put 100 percent into the videos I make and they’re usually well received by those around me but nothing of this caliber.”

We can’t wait to see his work on the big screen! People in the film industry have already reached out to him, so it’s only a matter of time!

Check out his stunning special effects in the video below, and share this story to amaze your friends.

if y’all can retweet this enough times that Disney calls, that’d be greatly appreciated pic.twitter.com/GrKlIRxg3J