Once again, Eldad Hagar and his Hope For Paws crew has shown that dogs who are deemed too aggressive to adopt sometimes just need something they’ve never experienced before: love.

Edie, a Maltese poodle mix, was at the end of her rope. For 15 days, she’d languished at a high-kill shelter in Lancaster, California, waiting for someone to adopt her, but there were no takers. That didn’t surprise the workers there, who didn’t understand that she was only lashing out because she was terrified of humans. 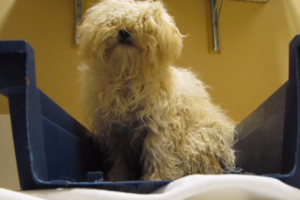 But at the 11th hour, just an hour before she was scheduled to be euthanized, Eldad walked through the doors… and his kindness made all the difference.

First, he asked to take her to a separate room for an evaluation, but even then, she did everything she could to get away from him, crying piteously and scuttling into a corner when she saw a leash dangling from his hand.

“Edie was so scared that she defecated, so I quickly pulled her out of the corner and onto my lap right away,” Eldad recalled. 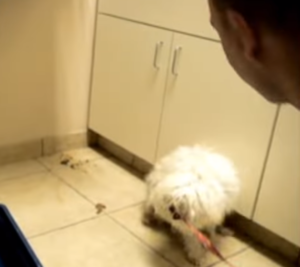 With his magic touch, it didn’t take long for Edie to settle down, and she soon stopped resisting his touch and trying to get away. Her tail even slightly wagged as he reached out to brush the mop of overgrown fur out of her eyes, and she eventually flopped down on the floor to expose her belly, as if saying, “My life is in your hands now.”

Now that he’d gained at least a smidgen of trust, Eldad pulled her from the shelter and sweet Edie had her first grooming session in what must have been months. She’s still not sure what to think about all this, but that little wag’s a good sign…

Six days later, she was headed to her new home in posh San Marino, a little more than an hour from the shelter whose walls would’ve been her final sight if it hadn’t been for Eldad. All these changes were coming so quickly, she was overwhelmed and had to be carried across the lawn to meet her new mom.

But one good whiff and hearing the soothing words coming out of this kind woman’s mouth told her all she needed to know about this latest turn of events, and her tail started whirring… 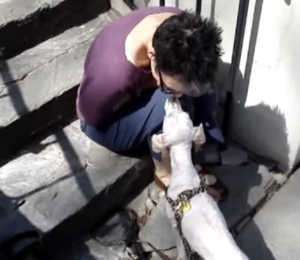 It took a while for her coat to grow back in, but once it did… you simply wouldn’t recognize this as the same Edie who, just three months earlier, had been deemed too aggressive to adopt. Look at that smile! 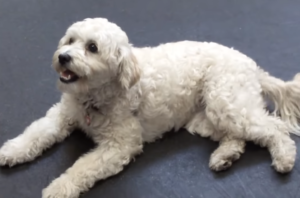 Watch the start of this amazing transformation in the video below, and share to spread happiness that Edie finally found happiness.