Reaching our goals can, at times, feel next to impossible. But Christian Montijo of Kissimmee, Florida, is living proof that hard work and perseverance are all we need to unlock better versions of ourselves.

In his 20s, the father of two came to terms with the fact that his life didn’t turn out as he’d pictured. He dreamed of joining the Army since he was in high school. The only problem was he was in no shape to serve. But his story shows it’s never too late to change. 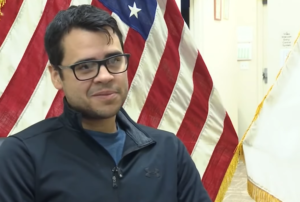 Christian began gaining weight after becoming a banker. With the long hours came unhealthy habits, like eating fast food and overindulging on soda. At his highest, he weighed 350 pounds — or, at least, he thought so. That number was as high as his scale could go! He knew he was at a crossroads.

“I got to a point to my life that I thought if I keep going on this path I’m just going to keep gaining weight and get to a point that I’m either going to die or be in a wheelchair or something like that,” he said. So, in 2018, he chose life — and his dream. He was determined to enlist the next year.

Christian started by making small adjustments he knew he could stick to in the long run. He began walking around his neighborhood, then running, and tracked the calories he ate. He also swapped soda for water, and prepared protein-rich meals with plenty of fruits and vegetables.

By the time he’d dropped over 100 pounds, Christian was ready to visit his local recruiting station. There, he met another hurdle when the recruiter told him he’d need to lose another 30 pounds. It didn’t deter him, though. He was up for the challenge. 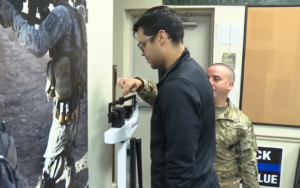 Christian kept up with his new lifestyle, and by the end of 2019, he’d lost a total of 165 pounds! Not only was he finally Army ready, but he became the dad he always wanted to be.

“I have energy throughout the day and to know where I am compared to where I was last year is a surreal feeling,” he told Men’s Health.”The fact that I can keep up with my kids and do more things with them is the biggest and best thing about this.”

In January, the 28-year-old left for basic training in Fort Jackson, South Carolina. And now, his recruiter, Sgt. 1st Class Isaac Ayala, uses his before and after photos to encourage potential recruits who need to lose weight! 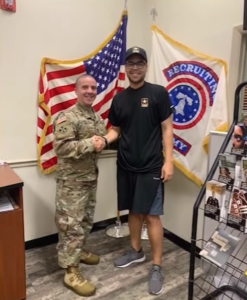 Congratulations, Christian! Clearly, you have both the mindset and strength it takes to be a soldier. We know you’ll make your country proud.

Learn more about Christian’s journey to a better life in the video below, and share to motivate others as well!