We often forget that what makes us different also makes us extraordinary.

Benjamin Russo is a perfect example! The 9-year-old has dyslexia, but he doesn’t see it as a disability. Instead, he calls it his superpower. 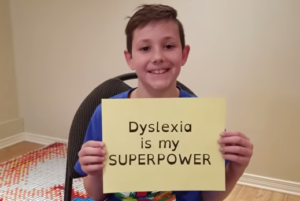 Back in December, Benjamin shared a video on YouTube demonstrating one of his incredible gifts. Before he dives in, he introduces himself with a series of cue cards.

“I have dyslexia,” they read. “I struggle with reading and writing. I mix up my words. I get very frustrated and upset too sometimes, but… having dyslexia also means I can do something amazing!”

That’s when he begins his special project. As the moments fly by, he reaches into a box filled with Rubik’s Cubes, twists each of them into a unique pattern, and lines them up on the floor. Five hours (over the course of a few weeks) and 750 Rubik’s Cubes later, he proudly shows off a huge portrait of professional wrestler John Cena! 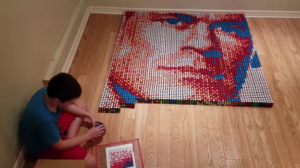 Benjamin’s dyslexia gives him a heightened sense of spacial intelligence, so he can copy patterns very quickly — especially when it comes to Rubik’s Cubes. According to his mom Melanie, he can solve one side in about a second!

After his video went viral, Benjamin was showered with encouragement from people around the world. The most memorable of them all was a tweet from John Cena!

This talented boy has so much to offer! After all, he’s already changing mind-sets and inspiring others to believe in themselves! We can’t wait to see how his next project will turn out. In the meantime, we’ll be keeping up with him on Instagram.

Share this story to remind your friends to focus on the good within themselves!