The country of Australia is home to some of the strangest wildlife on Earth. But even in a place like Australia, you’re bound to come across some things that will even make the locals scratch their heads.

That’s what happened to the crew of a ferry in the Sydney harbor. At first, things were going normally enough.

At first, they couldn’t make it out. 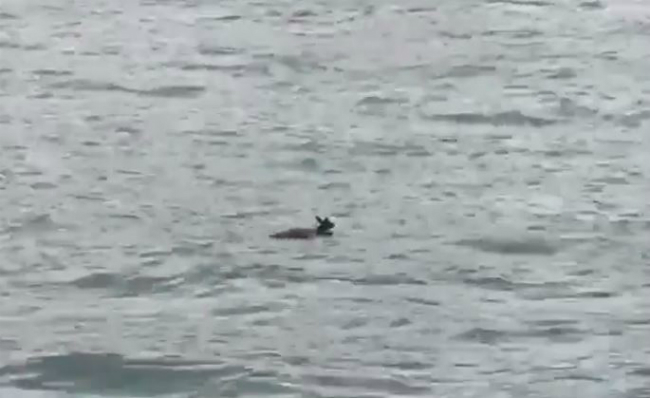 They weren’t the only ones wondering what the tiny object was. A woman and her children in a pram also spotted the unusual furry creature. Eventually, everyone realized what they were seeing: a tiny, exhausted wallaby fighting for its life.

As the Australian ABC news site explained, the little marsupial was spotted swimming approximately 164 feet from shore. The woman and her children maneuvered their pram alongside the ferry. She informed the crew that the animal had apparently jumped into the water “and [was] swimming around.”

It’s possible the wallaby wanted to cool off and didn’t intend to find itself out in the middle of the bay in need of rescuing. Luckily for this little guy, there were caring humans nearby ready to lend a hand.

Interestingly enough, this is reportedly the second wallaby-related incident local authorities had to respond to within a couple of weeks. Only in Australia.

Hopefully the next time this little guy gets the urge to swimming, he’ll think again.

Check out the unusual rescue in the video below, and share if you’re glad our furry friend was saved!