It’s hard to imagine how anyone could abandon a helpless creature and not care whether they live or die. Fortunately for one floppy-eared puppy, that wouldn’t be the end of his story.

In early April, Tegan Griffith was making her daily commute to work when something on the side of the Wisconsin county road caught her eye. She noticed movement in the ditch. 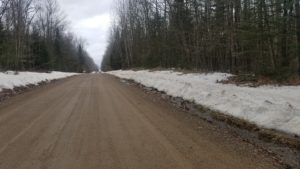 Tegan pulled her car over and took a closer look. There, left for dead, was a tiny, shivering puppy looking up at her with big brown eyes. She knew she couldn’t leave him, so she scooped him up, turned up the heat in her car, and set him on the passenger seat.

Heartbroken by what she saw — and delighted to have met such an adorable critter — Tegan began chronicling her experience on Twitter, writing, “Sooo… I found a puppy in a ditch on my way to work this morning. How was your day?!” 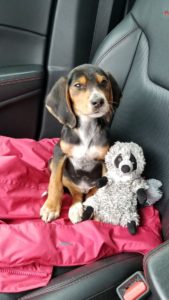 She then detailed how she came across the poor thing, who was clearly malnourished. Tegan gave him a cheese snack from her lunch bag and set off for work again, puppy in tow. 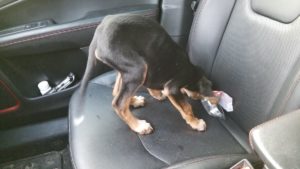 Wearing the little guy she named Larry in her vest, Tegan “snuck” him into the office — though, his presence was no secret to her coworkers. 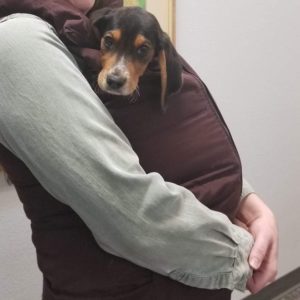 Luckily, Tegan has the option to work from home, so she grabbed her laptop and other work gear and got straight back on the road. 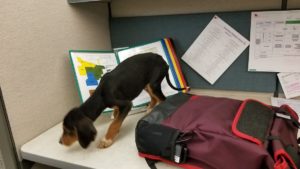 At home, Tegan contacted two different animal shelters. The Forest County Humane Society returned her call shortly after. “You know what they said?” she asked her Twitter followers. “Oh! You found NUMBER FOUR!”

“It turns out little Larry (center) has three sisters,” she added. “A very bad person (VBP) dumped them in a rural, wooded area not far from our home. His sisters were dropped off yesterday by an acquaintance of the VBP. Which means Larry stayed out overnight, alone.” 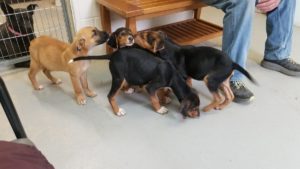 Larry’s sisters were overjoyed to see their long-lost brother, who turned out to be the runt of the litter at just 10 pounds. 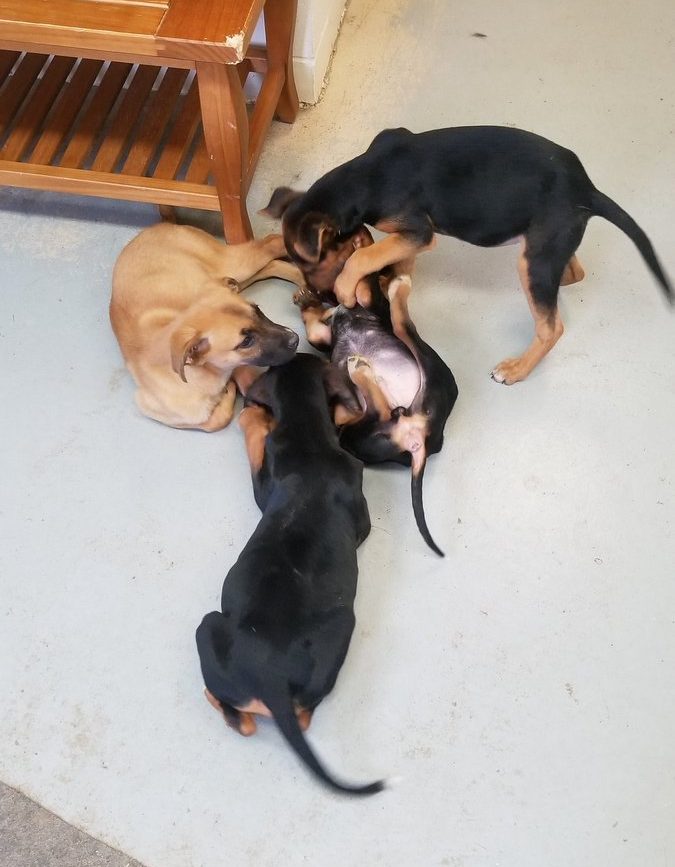 Larry and his sisters have been staying at the shelter while the vet examines them, gives them necessary shots, and treats them for parasites and dehydration. In the meantime, Larry’s story has gone viral thanks to Tegan’s tweets. People from all over the world fell in love with the four puppies, showing an incredible outpouring of support. 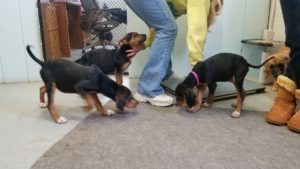 Forest County Humane Society has received over $12,000 in donations so far and countless calls from people hoping to adopt the puppies. But Larry is already spoken for, as Tegan and her partner have decided to bring him home for good! 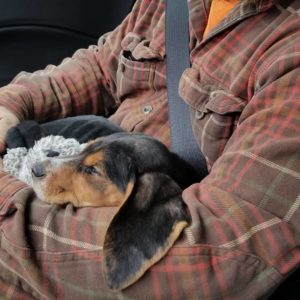 While Larry and his sisters had a very rough start, they can rest easy now knowing they’ll be loved and cherished by their new families, who will never leave them behind.

Share this puppy’s happy ending with all the loving pet parents in your life.

Supermoms come in all shapes, sizes — and species! While Canadian geese aren't Mike Digout's favorite animal, he can't deny these birds make excellent parents. After all, he's seen it...

This Adorable Dog With An Extra-Long Snoot Has The Internet Falling In Love.

Do not adjust your screens! That's not an anteater at the local dog park, it's most likely a Russian borzoi. Borzois are large sighthounds that are sometimes described as "long-haired...