It was hard for the family to keep a lid on it, but they did — and seeing this young man’s tearful reaction to his graduation surprise was worth its weight in gold!

U.S. Army Sgt. Damon Solomon has been in the armed forces for 18 years, and unfortunately, for most of that time, he’s been deployed overseas. He left for his fifth deployment in January, and since his assignments keep him away from home for two or three years at a time, it meant he’d have to miss his son’s high school graduation…

At least, that’s what Tyler Solomon, a senior at Marshfield High School in Massachusetts, thought as he counted down to the big day. And that’s what he believed, up until the very last minute. 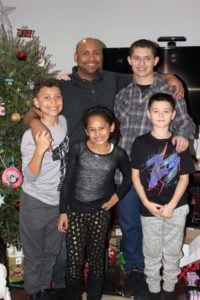 Like the hundreds of other students in his graduating class, Tyler marched up to the podium when his name was called, shook hands with the principal and took his diploma. But when he started to walk away, Robert Keuther’s grip tightened. 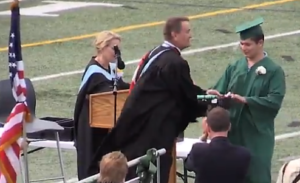 “Hold one sec,” he said quietly. Then, from the announcer behind them, “Please join us in recognizing U.S. Army Sgt. Damon Solomon, who was granted special leave this weekend from his fifth deployment in Kosovo to celebrate Tyler’s graduation.”

All of us would have a hard time processing this, and Tyler was no different. He looked slightly confused and almost unfazed, but when he saw who was standing on the far side of the field — away from the other graduates’ families — his mouth dropped wide open! 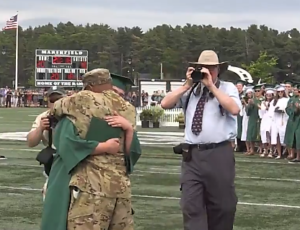 His father had pitched the idea to his superiors about a month earlier and they were happy to go along with it. Only a few other people knew, including Damon’s girlfriend and mother, and, of course, the high school principal.

The proud father credited the school for working out most of the logistics to spring the surprise on his fine young graduate, who called it “the best graduation gift I could ever get.” 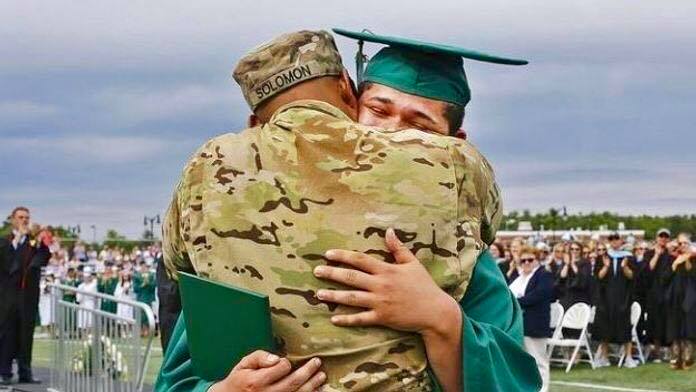 Damon’s leave only lasted eight days, but he managed to make the most of it, not only attending Tyler’s graduation and the celebration afterward but meeting the newest addition to his family and soaking in time “with the ones I love most.” 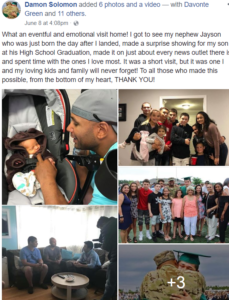 Watch Tyler’s expression change from stoic to complete shock in the video below, and share to spread the love!

Marshfield High School graduate Tyler Solomon is stunned as he receives his diploma and is reunited with his father, who made a surprise return trip from a year-long deployment overseas. The entire Solomon family had no idea he would be there until he appeared on the field. pic.twitter.com/iiETnxutl0