The internet is often regarded as a hostile space full of nasty comments. Jimmy Kimmel made an ongoing series out of celebrities reading “mean tweets” about themselves, after all.

That said, it isn’t hard to find the good in humanity online. Just ask Tom Hanks, who teamed up with Twitter to bring the world some positivity in one of the nicest videos around. 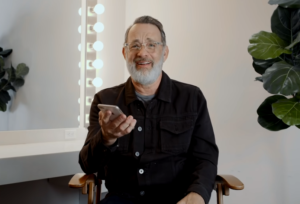 The actor, who plays Fred Rogers in “A Beautiful Day in the Neighborhood,” read the nicest tweets he could find. And clearly, they’d all be enough to make the real Mr. Rogers proud.

Some detailed simple acts of kindness, including a former McDonald’s employee who wrote he always made sure to add an extra nugget to every 10-piece meal he made. Another person recounted riding on the train, where a fellow passenger watching “The Office” turned on the subtitles so they could both watch. 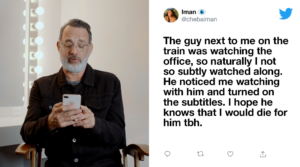 But perhaps the sweetest came from someone dealing with a breakup. That same day, she went home to find a cookie cake from her dad. He’d written on it in icing, “You’re still my #1 Love, Dad.” The tweet tugged at Hanks’ heartstrings.

“I’m gonna start crying again ’cause that’s absolutely beautiful,” Hanks said, adding, “By the way, whoever broke up with you is a dope.” 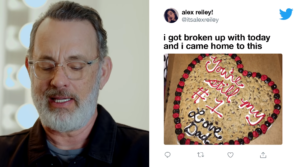 Another shared the story of an elderly woman who loves her neighbor’s cat, Chips. She snapped a photo of the feline, got it developed, then gave it back to the owner as a gift. Included was a note that read, “For you. Your lovely cat. I always look for him.” 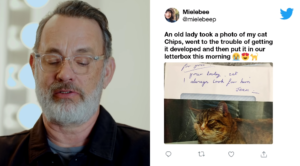 But clearly, Hanks’ favorite was about Bear, the heroic dog who uses his nose to locate and rescue koalas from Australia’s bush fires.

“This is a Disney movie that must be made,” Hanks said. “The story of Bear: the koala detection dog. That’s adorable. I like Bear.” 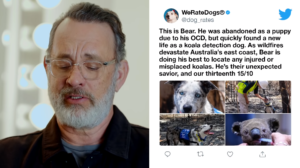 Now this is a series we’d love to binge-watch! We could all use more kindness in our everyday lives, and the internet is a great place to start. Let’s all keep this in mind the next time we log in and add our own uplifting comments to the mix!

Listen to Hanks’ narrating more nice tweets in the video above, and share to spread the positivity!