It’s not easy being a dog, especially when you always seem to be the butt of the joke.

Take the “What the Fluff” challenge. They fooled Bear once, maybe twice… okay, a bunch of times. But he’s on to them now, and here they are, doing it again. The loyal golden knows his family is just trying to cheer him up because he’s been a little depressed ever since his dad was deployed. How long is he going to be gone, anyway? It’s been months! 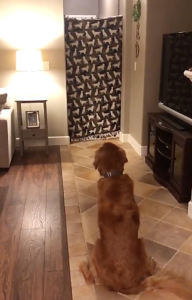 Bear has heard this song and dance many times before… but just when he thinks he knows what’s about to happen, his family pulls off the best surprise ever. 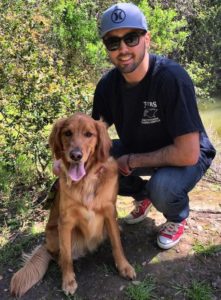 This is Bear’s dad, Kevin Coburn. The Boise, Idaho, resident is in the Army and he’s been gone nine long months. In the video, Bear’s human brother starts off the challenge: 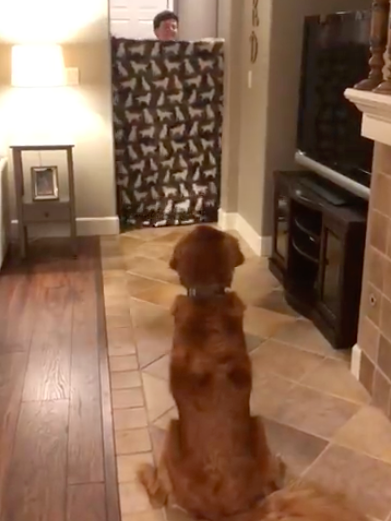 You know, I didn’t just fall off the turnip truck. Can we speed this thing along? I’ve got a toy to play with.

When his brother drops the blanket, though, unlike other What The Fluff challenges where the person disappears, this time, someone else stands on the other side of the curtain. 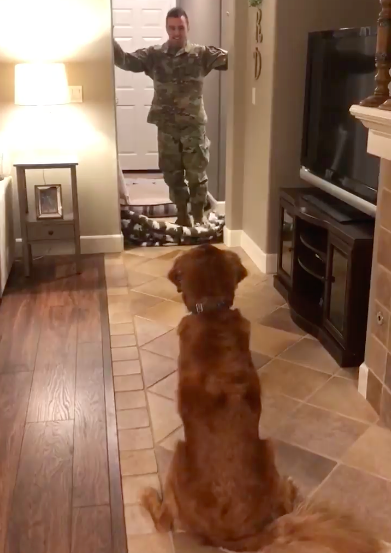 Gasp! It’s the moment Bear’s been waiting for! He can barely even believe his eyes, momentarily stunned. Then, Bear brings it in for the real thing.

The sweet pup lets out round after round of almost human-like cries and whimpers of joy, his tail thumping a mile a minute the entire time! He spends the rest of the video in a state of pure bliss, curling around his soldier’s legs and loving on him and all those other things a dog does when he spots the apple of his eye. 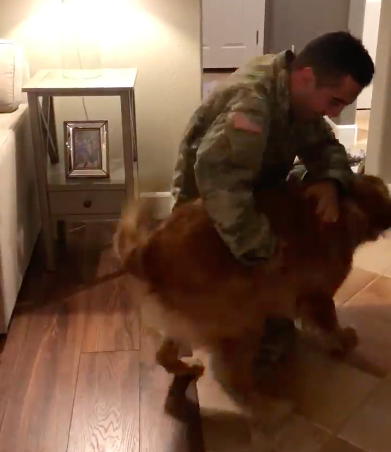 Kevin shared this heartwarming video on his Facebook page earlier this month and it’s understandably gone viral, which just goes to show everybody loves a happy reunion! Guess these pranks aren’t always so bad, huh, Bear?

Watch this sweet pup’s dreams come true in the video below, and don’t forget to share to warm some hearts!

9 months too long? (for usage and licensing, contact licensing@viralhog.com)