The power of love, support, and encouragement is tremendous. It emboldens us to do things we never thought ourselves capable of achieving.

And for a little boy named Phoenix, it meant the difference between giving up on himself and succeeding. The 5-year-old takes a karate class at Bobby Dixon’s American Martial Arts Academy in Orlando, Florida. Recently, he and his classmates took on the challenge of breaking a wooden board, but try as he might, Phoenix couldn’t quite split it. 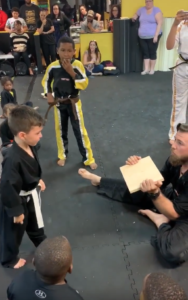 Phoenix’s mom Claudia Swonger recorded as her son lifted his leg and kicked down onto the board. The little boy falls, gets up, and tries again without any luck. Claudia says he didn’t have to break the board to advance, but he was determined. 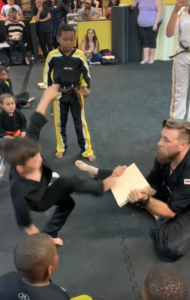 While Sensei Erik Gianini tries to give Phoenix some pointers, it all starts to become too much. Phoenix grows frustrated and upset. His classmates could break the board, so why can’t he? Embarrassed, the poor kid starts to cry. 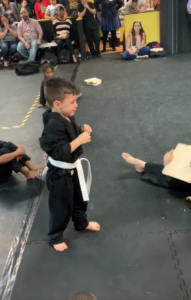 But then, Claudia captures the sweetest moment on camera. Phoenix’s peers start shouting words of encouragement and chanting his name. Drawing strength from their support, the little boy tries again, channeling all his energy into that kick. 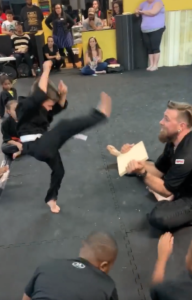 And while the first time he fails again, Phoenix finally breaks the board on his second try! 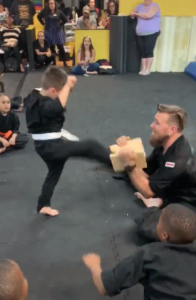 The room erupts in a cacophony of screams and cheers for Phoenix, who learned a very important lesson that day. 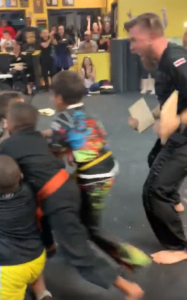 As his proud classmates swarm around to shower him with hugs and congratulations, the little boy can’t help but grin. Claudia shared the video on Facebook with the caption, “My boy learned one of the most important lessons in his life today! NEVER.. EVER GIVE UP!” 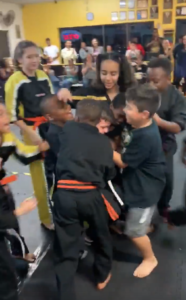 Phoenix’s victory just goes to show that we all need a helping hand from time to time, and there’s no shame in accepting it. That’s what our friends and family are there for! None of us gets through life completely alone, and we wouldn’t want to, anyway.

Watch as Phoenix’s classmates give him the confidence boost he needs in the video below, and share to remind others to never give up.