The day Monica and Dean Berckenhoff finally tied the knot was bittersweet. As much as they wished otherwise, their oldest boy, Colton, couldn’t be there to celebrate with them.

The last time they saw their beloved son was in June 2012, when the 11-year-old died in a tragic accident. Devastated as they were, his parents decided to donate his organs. They couldn’t bring their little boy back, but they could give others the gift of life. 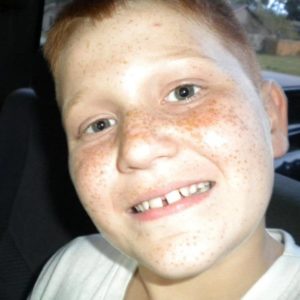 Seven years later, Monica and Dean exchanged vows in front of their family, friends, and their two other children. Happy as they were, though, everyone couldn’t help but hope for the impossible. While their wish didn’t come true, they were blessed with an incredibly touching moment they’d been dreaming about for the better part of a decade. 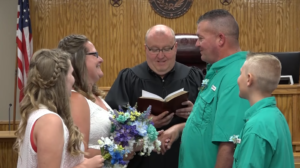 As is customary, the wedding officiant asked during the ceremony if anyone wanted to raise an objection.

“I would,” said Monica’s sister, Amanda McDonald as she stood up, tears in her eyes.

“I love both of you so very much,” Amanda said. “And I know the one thing in the world that you both would want so much is to have Colton here. But [we’re] going to give you something so much better.” 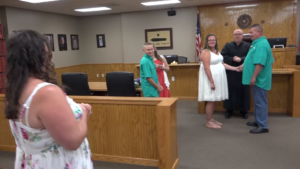 That’s when a special guest — the man with a piece of Colton beating inside him — walked in. Travis Stufflepean, who was “born with a bad heart,” has had multiple open-heart surgeries throughout his 28 years. When the right side of his heart began to die, he was placed on the transplant list, and that’s where Colton came in. When the young boy passed, Travis got his heart during his sixth massive surgery.

Ever since, he’s wanted to meet Colton’s family. He finally got his chance when Amanda reached out to him a few months before the wedding. He’d traveled from Arkansas to Texas to be there on their big day. 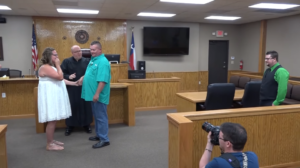 There wasn’t a dry eye in the room as Monica wrapped her arms around Travis and sobbed. 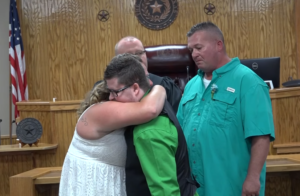 Travis brought a stethoscope with him, allowing the newlyweds to listen to their son’s heartbeat one last time. Dean says he received a priceless gift that day: closure. 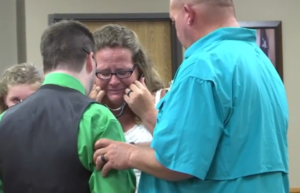 Travis says he’s been waiting just as impatiently for this moment, this reunion, as well.

“Because you’re bringing the heart back home. To me, this is just a temporary heart. I’m just borrowing it. To me, this is where it belongs. With this wonderful and awesome family,” he said. 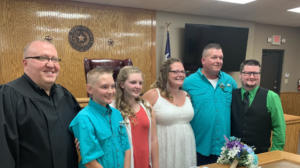 Colton should never have died so young, but his parents must take comfort in knowing his legacy will live on in Travis, their new honorary family member. Rest in peace, sweet boy. 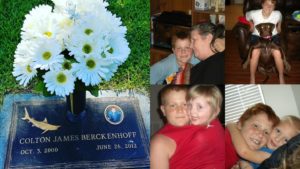 Watch the touching moment below and share this story to encourage others to consider life-saving organ donation.