Some of the most powerful stories have been told through images, not words.

Omer Yavuz could have never predicted the response to the scene he captured in Adiyaman, Turkey. It was January 2018. A boy stood in the cold, staring inside Omer’s gym, the Olympiat Sports Center. He wore flip-flops and a shoeshine kit over his shoulder — both telltale signs of poverty among refugees. Omer felt compelled to snap a photo and share it online. 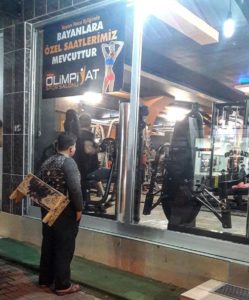 It wasn’t long before the photo went viral, breaking people’s hearts. It even caught the attention of Mustafa Kucukkaya, who co-owns the gym with Engin Dogan (pictured below on the right). The image touched him so deeply that he knew he had to find the boy. So he shared the photo on his Instagram account with a generous offer.

“If anyone knows this brother, please get in touch with us,” he wrote. “We know that feeling very well. He will have free access to our gym club for a lifetime.”

And thanks to the power of social media, he met 12-year-old Muhammad Hussein just two days later. One of the gym’s members spotted the boy out shoe-shining and brought him to Olympiat. There, Mustafa learned Muhammad and his family fled Syria five years earlier. Their only other source of income was collecting and selling scrap paper and metal. 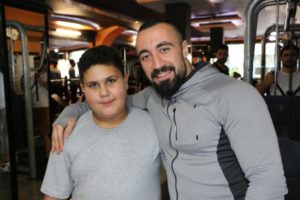 While Muhammad had no idea about the photo or its impact, he was thrilled about the lifetime membership. He immediately put the gift to use by following a kid-friendly program, and lost weight within the first week! What’s more is his story has since inspired multiple offers from strangers to help his family.

“Some rich businessmen called,” Mustafa said. “A rich businesswoman from Ankara called and said she will send a package to his house. Even a person from Qatar called.” 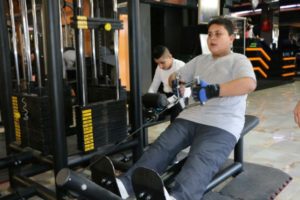 Omer’s photo tells a heartbreaking story, but it’s also a beautiful example of what happens when we call attention to those in need. While a gym membership won’t solve all of Muhammad’s problems, it showed him that people truly care. And that’s a priceless gift.

Learn more about Muhammad’s story in the video below, and share today!