As Hurricane Florence barreled toward North Carolina last month, countless residents were forced to evacuate. But in the days after the hurricane hit on September 14, emergency rescue teams from around the country arrived in the affected communities and worked tirelessly to rescue and reunite pets with their owners.

Among them was a nine-member disaster response team from the Humane Society of Missouri, which spent 10 days scouring flooded neighborhoods for signs of life. 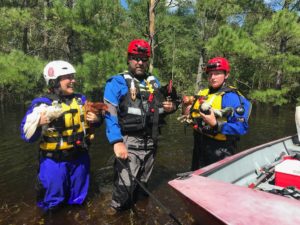 One resident in Pender County, North Carolina was separated from her white Maltese terrier, Soshe, during her rush to evacuate. Stranded in Wilmington, she called a friend in tears and desperation, asking her to stop by her house to see if her beloved pooch was still alive. When the disaster response team got wind of it, they motored out in search of her address, but discovered the waters were up to the rooftops throughout the neighborhood. 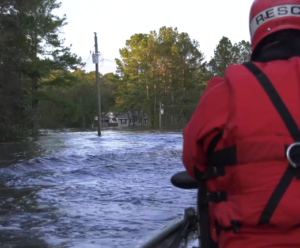 The boat broke down, forcing them to navigate by paddle, but by the time they arrived in the neighborhood, the waters had receded just enough for them to find the house. Amazingly, they heard Soshe’s desperate barking coming from inside. This brave Maltese had spent the last week floating on a couch, waiting for someone to come rescue her! 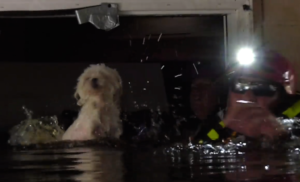 After breaking down the door, one of the members swam inside and scooped Soshe up from her perch and carried her outside.

Back on dry land, Soshe savored her freedom and the feel of her rescuers’ loving hands, and scarfed down as much kibble as her little body could hold… 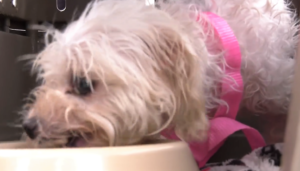 Soshe has since been returned to her very grateful owner. This is just one of countless reunion stories thanks to the hard work and determined efforts of this special rescue team. 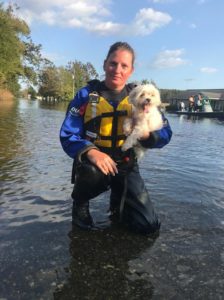 Watch the whole rescue in the video below, and share to thank everyone who was involved in this and other rescues!

Our Disaster Response Team continues work in Hurricane Florence – affected areas of North Carolina. Take a moment to watch Soshe's dramatic rescue – and happy reunion! We can't be there for these rescues without your support, so please make a gift for animals affected by disaster today.Code 3 AssociatesAmerican HumaneRescue Ranch👏👏👏👏👏

Posted by Humane Society of Missouri on Sunday, September 23, 2018