Firefighter found signs of life last week in an area left blackened and charred by the Camp Fire that burned through northern California.

Geoff Downing was among the firefighters from the Foster City Fire Department dispatched to help fight the blaze that tore through Butte County. While out on patrol, he and the rest of the crew heard meows coming from nearby shrubbery, so Geoff got down on his knees and eventually persuaded a frightened and injured cat to come out of its hiding place. 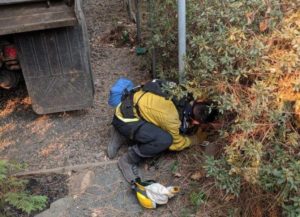 “The cat had burns to its whiskers and bottom of its paws,” the fire department wrote in a Facebook post. “E28 crew were able to get some much needed food and water for the feline….who was named ‘Foster’…”

However injured and frightened Foster had been until that point, he could obviously sense he was finally safe and showed his appreciation by lavishing affection on his rescuer. Using Geoff’s arm as an improvised feeding station, he hungrily gobbled up the proffered food. 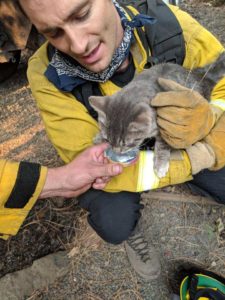 The North Valley Animal Disaster group has more than 1,000 animals in its care and is working to reunite them with their families. A fire department spokesman said there have been some “good leads” on finding Foster’s family and hopefully they’ll be reunited soon. 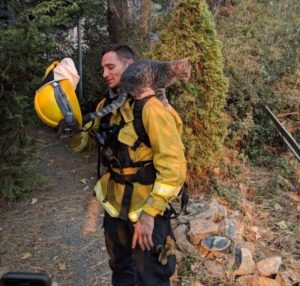 Scenarios like this will often boost the spirits of Firefighters who have, for days, witnessed nothing but tragedy and destruction. We are proud of the compassion and dedication our Firefighters show to not only their own community, but to other communities in need. We look forward to their safe return after the mission has been completed. 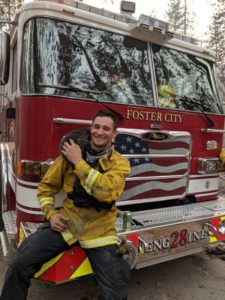 We’re all heartbroken for the families that have been affected by the Camp Fire and and share in their grief. Fortunately, stories like this are now coming to light, showing that however destructive fires and other natural disasters may be, they’re no match for humanity’s capacity for love and compassion. Share to spread the love.