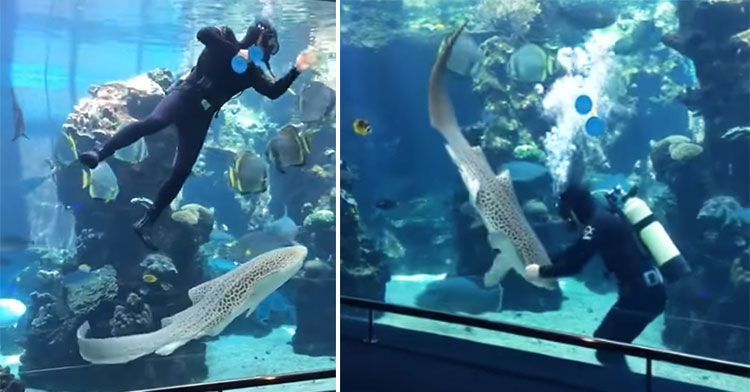 Cleaning a little aquarium with various pet fish inside isn’t as easy as it sounds. You’ve got to get all the gunk off the glass while keeping an eye out to make sure none of your aquatic friends get in the way.

Now think about how much harder it is to clean an industrial-sized aquarium. You have to throw on your scuba gear, monitor your breathing, scrub away at all the nasty algae… all while fending off sharks!

Say “shark,” and most people think of hammerheads, great whites, and other aggressive species, but there are actually calmer, dare we say friendlier ones like the zebra shark! Case in point: this video. 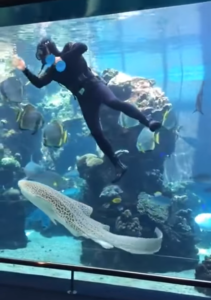 A member of the diving maintenance staff was cleaning the aquarium at the Aquarium des Lagons, on the southwest coast of New Caledonia, when this shark decided now was a good time to get some special attention.

The shark swims around him as if to casually ask, “Heyyy, whatchya doin’? Anything important?”

At first, the diver is focused on the task at hand, but a few seconds later, he notices the shark’s persistence and pauses his work. 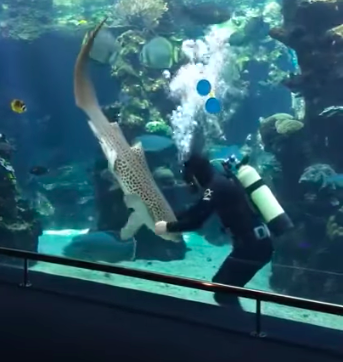 The shark swims over and the diver brings it in for the real thing… a hug!

Seconds later, he rotates the shark until it’s upside down, then gives it a big ol’ belly rub!

When they’re upside down, sharks often go into a trance-like state, called tonic immobility, because their muscles loosen and respiration slows.

Watching this clip is so peaceful, you might even feel yourself falling into a trance, too. 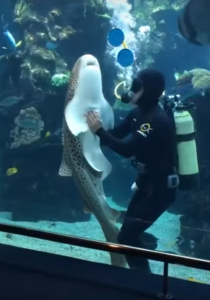 Then again, maybe he’s not in a trance at all, and he, like the rest of us, just enjoys a good tummy rub.

As one Redditor noted, “no matter who or what you are, you can’t pass up a good belly rub.” This affectionate little interaction goes on for well over a minute before the shark drifts off and the diver picks up right where he left off, like giving belly rubs to sharks is all in a day’s work!

Check out this adorable encounter in the video below, and share to spread smiles. (Speaking of smiles, doesn’t it look like the shark’s grinning?)