There are some things in life that many of us just take for granted. Take the ability to speak, for example.

Author Emily Wallace’s 13-year-old daughter Bessie was born with a neurological disability that stole her voice away. When she was a baby, Bessie’s family just thought she was developing a little more slowly than other kids her age, but one life-threatening seizure and a visit to the neurologist revealed a difficult truth.

The diagnosis rocked the child and her family, but their love has always gotten the little one through. Bessie is particularly close to her sister, Ernestine. “If you see me, you’re going to see her too,” Ernestine explained. “I can’t be away from her no longer than she can be away from me.”

While the two of them haven’t had a conventional conversation, their bond is strong and they’ve gotten to know each other in their own special way. In fact, it was one of Ernestine’s passions that sparked something magical in Bessie. 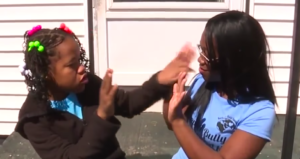 Ernestine is a singer and songwriter who’s loved music her whole life. Just by being in Ernestine’s presence, Bessie also grew to love music. One day, Emily heard one of Ernestine’s songs playing from another room. Then she heard something that blew everyone in the family away. 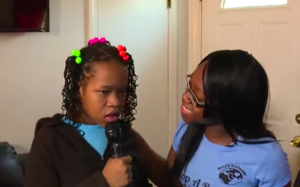 Bessie was singing! Up until that moment, she was almost completely non-verbal. After 13 years, Bessie found her voice through her sister’s song. A video of her singing was shared online and quickly gained traction, and for their family, it was nothing short of a miracle.

Ever since that day, Bessie has been starting to vocalize a bit more. She loves singing with her beloved sister and has even started picking up some words here and there!

Watch Bessie singing to one of her sister’s original songs in the video below. If Bessie’s determination inspires you, don’t forget to share her story with those you love most.