If you know pit bulls or any bully breeds personally, then you probably already know that they’re big ol’ softies.

Sadly, thousands of them have been trained to use their natural strength for fighting. Human intervention and exploitation have given them a bad reputation and each year, people all over the country and world call the police to report pit bulls, even if they’re not being violent. 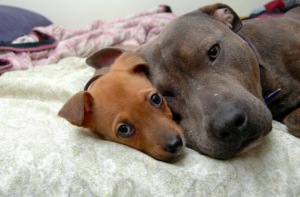 Sadly, this ends in the capture and killing of many innocent dogs. But one dog in Texas who found himself on the other end of such a call got to have a fun day in the squad car instead!

Officer Travis Frost (pictured below) got called to a neighborhood one day to address what was reported as a “vicious dog” problem. 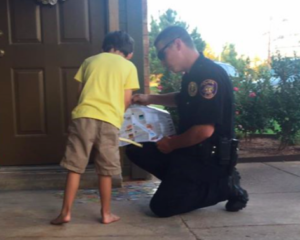 The station was told that there was a vicious pit bull in the area. He was prepared for the worst, but when he showed up to the scene, he was met with a very different picture than the one that was described on the dispatch.

Right off the bat, he noticed that the dog was just lying there on a porch minding his own business. He took necessary precautions, like leaving his door open should the dog lunge at him, but decided to hop out of the car and whistle at the pup to see what sort of reaction he’d get.

Much to his surprise, the gentle giant trotted over to him with his tail wagging. Amused by his new friend and his fancy car, the pooch stuck around for some more pets before hopping into the driver’s seat of the squad car and making himself right at home! 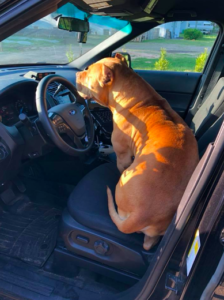 Per protocol, Officer Frost called animal control and just hung out with his new friend in the car until they arrived, snapping the precious photos you see here.

“Pit Bulls have a bit of a bad reputation. Travis said that, while you should always be careful around any dog that you don’t know, you shouldn’t automatically assume that all pit bulls are bad dogs. They might be really loving like this guy was this morning,” a post on the Texarkana Police Department’s Facebook page read.

And as it turns out, this big oaf isn’t even a pit bull! He’s actually an American bully, which is a breed that’s gaining popularity among people looking for good companion dogs. All he wants is a little love! 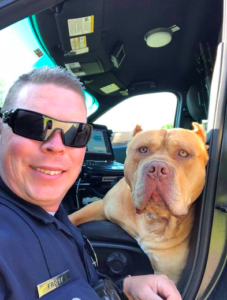 After making his way to the shelter, the workers scanned the dog for an identification chip and found one! The information on the chip hadn’t been updated, but after spending the night in the shelter, his owner was located. 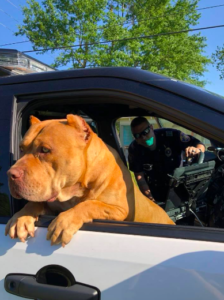 What a happy ending!

Share this lovable guy’s story to remind the people that rushing to judge is never the best idea! Always be cautious of animals you don’t know, but don’t let breed alone lead to prejudiced assumptions. Most doggos just want some TLC.