Teaspoon may be tiny, but she’s mighty.

While the mini horse is only 5 months old, she’s already endured hardship. She was (and still is) just a baby when an accident took her leg — and nearly took her life as well. But the little survivor is still here thanks to the angels who swooped in to save her. 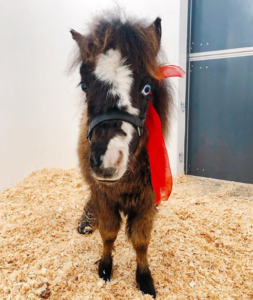 Goats of Anarchy, a farm sanctuary for animals with special needs, first heard Teaspoon’s story from Amanda Giese of Panda Paws Rescue. The horse was in dire need of medical attention, so her owners reached out to Amanda. She, in turn, contacted the organization for help.

“We were told she had been bitten by a [venomous] snake on the back hoof and as a result, the hoof and lower few inches of her leg had become necrotic,” the rescue wrote. “The family didn’t want to euthanize if there was any hope, but were close to making that decision when Amanda called us at Goats of Anarchy.”

If they could transport Teaspoon to their sanctuary, Amanda agreed to cover the initial expenses. So staff members Ellen and Ian prepared themselves for a road trip from Louisiana to New Jersey. 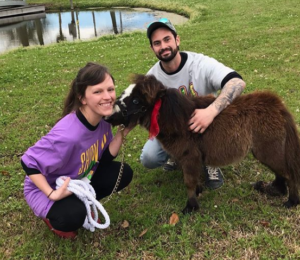 During the long journey home, Ellen couldn’t help but marvel at Teaspoon’s resilience.

“Her foot looks…not great,” she observed. “But her attitude is awesome!”

She and other Goats of Anarchy members saw that same toughness back at the sanctuary, where Teaspoon’s leg was amputated. In fact, it wasn’t long after surgery that she began walking on her temporary prosthetic!

They weren’t the only ones Teaspoon inspired. Walkin’ Pets, whose products benefit differently-abled pets, heard the horse’s story and created a custom wheelchair out of a frame Amanda donated. Teaspoon will get a prosthetic limb when she’s fully recovered, but in the meantime, she’s already mastered getting around on wheels!

Teaspoon’s story just goes to show that with love and care, injured animals bounce back! We’re so happy she gets to enjoy her life from here on out, surround by people who would do anything to keep her healthy and safe!

See more of Teaspoon’s journey to her new home in the video below, and share with other animal lovers!