Nothing brings people together more than shared interests, but we especially love it when that interest is music!

Through his Manor Media Productions company, Doug Manor of Travelers Rest, South Carolina, uses sounds and images to tell stories. A couple months ago, he posted a video of his son, Trevor, and the young man’s grandmother making music together. But watch and listen a little deeper, and you’ll realize it tells a story on several different levels. 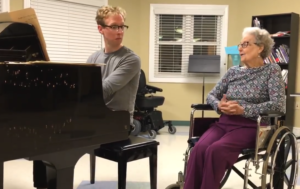 It speaks to the bonds that music creates: Trevor sits at the piano and plays “Somewhere Over The Rainbow,” the beloved song from “The Wizard Of Oz.” His grandmother, Gwen Gustafson, sits about a foot away in her wheelchair, seemingly content just watching his fingers fly across the keyboard. She takes us by surprise when, about half a minute into the video, words begin flowing out of her mouth like chiming bells!

But it also speaks to a multi-generational bond. “The Wizard Of Oz” was released in 1939, which means Gwen would have been around nine or 10. That’s just about the right age for a child to take maximum pleasure in a movie that would ultimately go on to become an American classic.

In the photo below, she’s pictured on her 88th birthday on July 4. It’s obvious this extended family is filled with love and support, not just for each other, but for the strong creative streak that runs through each member. 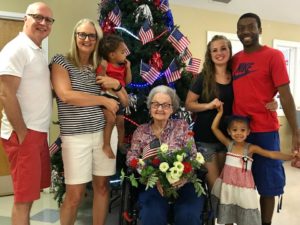 These two share a special connection through their love of music, and Gwen’s YouTube channel — who says an 88 year old can’t have her own YouTube channel? — is filled with videos of their musical collaborations. 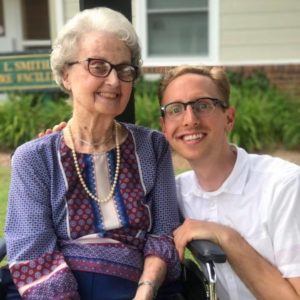 The “Somewhere Over The Rainbow” video has gotten hundreds of thousands of views, with many commenting on the obvious love and camaraderie between Trevor and Gwen:

“What a wonderful memory for the two of them … Judy Garland would have been proud of this performance,” one viewer wrote, while others remarked on Gwen’s stunningly beautiful voice.

Check out this musically inclined grandma-grandson pair in the video below, and share if you can almost feel the special bond they share!