By the time she was 10 months old, Piper’s parents were growing increasingly concerned. At that age, most babies have either already taken their first steps or they’re just months away. But Piper was absolutely refusing to even crawl.

Luckily her mom, Jessica Sinclair, worked for an eye doctor and suspected it might have something to do with her vision. So she and her partner, Andrew Verdusco, set up an appointment with an optometrist. 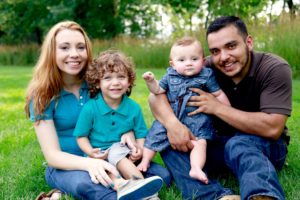 And her intuition was spot on: Little Piper was diagnosed as being severely farsighted, which explained why she was so reluctant to venture out into the world like other babies her age. Anything more than a couple feet away was just a big blur, which would frankly scare anyone, no matter how old they are.

But thankfully it was an easy fix. The following month, Piper went with her parents to pick up her brand new, custom-made glasses — and she suddenly became the nation’s sweetheart. Why? Piper wasn’t especially comfortable trying on her new specs in the optometrist’s office, but Jessica and Andrew brought them along when they went out to dinner that night to celebrate.

And the moment Piper realizes there’s so much more to the world than what she’s been seeing all this time = Priceless! 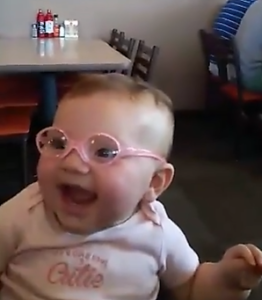 Her chubby little cheeks break into the most heart-melting grin you’ll ever see, and she gazes around her in complete astonishment. The world isn’t one big blur after all!

Remember the first time you were fitted for glasses, and how amazed you were at all the colors and fine details? And that’s just a little glimpse into how this precious little girl must’ve felt!

“You can hear Andrew laughing, but what you can’t see is, I was choking back tears of joy that she could see the world the way it was meant to be,” Jessica recalled. “It was a fantastic moment to witness.” 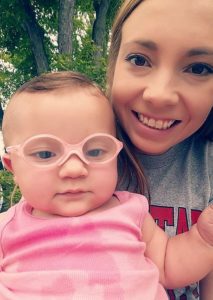 Meanwhile, Jessica and Andrew hope their story will encourage more parents to take their children to optometrists. The American Optometric Association recommends children have their first eye exams at six months old (but earlier if symptoms suggest there’s a problem or there’s a family history of vision problems), followed by another at 3 years old.

Click the video below to watch little Piper’s expression go from confused to absolute joy, and share to spread happiness that she’s now able to see the world in all its beauty!