“You are human. You are loveable. You are strong. You are enough.”

Those four affirmations are something artist and writer Nicole Leth wants others to repeat to themselves every day. She believes it can do so much more than brighten someone’s mood — it could potentially save a life. That’s why the 26-year-old is on a mission to spread positivity as far as it will go, starting with a road in Kansas City, Missouri. 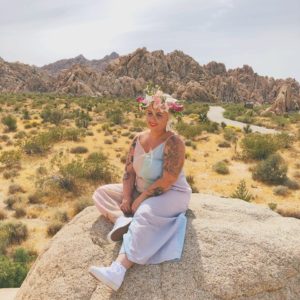 At 17 years old, Nicole suffered an unimaginable tragedy. Her beloved father took his own life. In the years since he died, she’s made it her life’s purpose to show others they matter before it’s too late. That they aren’t alone. And their lives are worth living.

“It’s been 9 years and I’ve learned a lot more about what it means to work to save a life and heal and the most important thing I’ve learned is that you can’t save someone else’s life for them, Nicole said. “But you can create a space to encourage, empower, and affirm them to save their own life.” 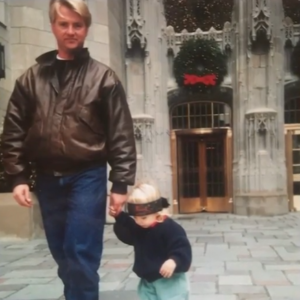 She started by leaving stickers with positive messages around public spaces, but recently, as she put it, decided to “make them louder.” So, in memory of her dad, Nicole saved up a few month’s worth of paychecks, designed a simple yet powerful billboard, and paid for it to run for a month. And since those four sentences appeared over Highway 71 near downtown Kansas City, they’ve resonated with thousands — including the billboard’s owner, who offered to keep Nicole’s design up longer for free!

“I have been receiving lots of emails from people who said it mattered, or they saw it and had a terrible day and didn’t think they could survive, and without knowing the story of the billboard, they said it let them live one more day,” Nicole told TODAY. She couldn’t have honored her father in a better way. 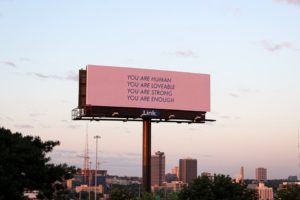 Now she hopes to spread the messages even farther. And she’s already off to a great start. Nicole has shared her artwork with people who plan to rent billboards in Florida, Iowa, Missouri, Texas, and even Canada. She also hopes to change the billboard’s location every month, and has set up a fund to cover costs. If you’d like to help, consider donating on Patreon. In the meantime, remember this: You are human, you are loveable, you are strong, and you are enough.

Hear more of what Nicole has to say about her labor of love in the video below. Share to help spread her messages.