A huge moment at a high school football game has gone viral, but it’s not what you’re thinking.

The clip doesn’t capture some clever play or a last-second touchdown, although, for the record, Lanier High School did win the game. But that’s beside the point, as far as the team’s assistant football coach is concerned, because he won something even bigger. 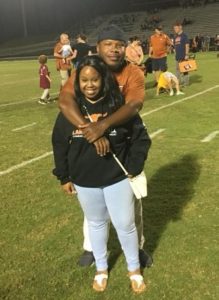 Nafis Pickett and Ashley Wilson have been dating for a little more than a year, and she’s been with him every step of the way, coming to every game and even helping to drive the team to away games. With just one minute, thirty seconds left in the game on November 2, Ashley was probably already thinking ahead to the victory party. But she had to switch gears fast. 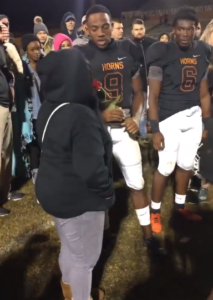 Imagine her surprise when one of the players approached her with a red rose, saying he wanted to take a moment to thank her for letting her boyfriend “coach up our young men and guide us through the hard times we’ve had.” Then the rest of the team starts circling around her and handing her their own red roses.

Then Nafis got on one knee and proposed. 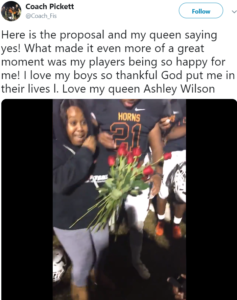 Of course, he had to give a short speech first:

About a year ago today, God placed this beautiful woman in my life. She’s been with me through everything in I do. I love her with all of my heart. I appreciate that everything she does for me. It’s only right that I ask her: Will you marry me?

Football’s such a big part of this couple’s life, it just makes sense, right?

Watch the big team effort that went into this dramatic proposal in the video below, and share to spread congratulations to this happy couple!