It’s easy to forget that people have immense talents and interests outside of their careers that they don’t usually get to show off. But when given the chance, they just might blow your mind.

In a video uploaded to Facebook by the Atascosa County Sheriff’s Office, Deputy Sheriff A.J. Mendez is given his time to shine. It shows the sheriff behind a drumset in full uniform, giving an impressive percussive performance. 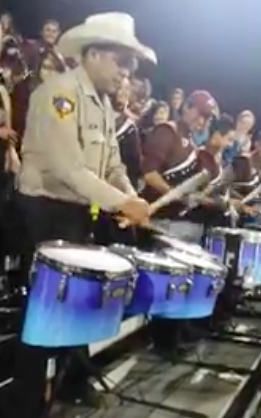 As the video caption explains, the sheriff is shown “interacting with the Poteet High School Band at the football game in D’Hanis on Saturday night.”

We would call it more than just “interacting,” though. Rather, A.J. more than keeps up with the other high schoolers within the band who he’s playing along with, even going so far as to execute a mini drum solo with immense ease. He looks (and sounds) professional! 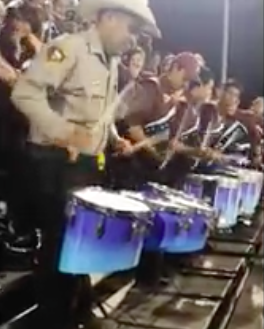 I can’t help but to wonder if A.J. wasn’t in the high school band himself at some point, seeing as he knows the song by heart.

At the end of the performance, the teens in the bleachers respond with a roar of applause, and A.J. high fives another drummer before letting out a huge smile. 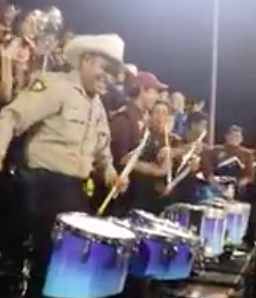 We can imagine his surprise performance was the highlight of the event. Share if you wish you could practice your own hidden talents more often!

Deputy Sheriff A.J. Mendez interacting with the Poteet High School Band at the football game in D'Hanis on Saturday night. Our Community Matters