Lots of kids follow in their fathers’ footsteps, but it’s almost predestined when said son is his father’s spitting image, they have almost identical singing styles, and Dad happens to have some of the most famous pipes in the world.

Italian singer and songwriter Andrea Bocelli has been hailed around the world as one of the best singers of all time. Not surprisingly, he’s passed on his musical genes to both his sons, Matteo and Amos Bocelli, and they’ve even been featured in some of his recordings over the years. 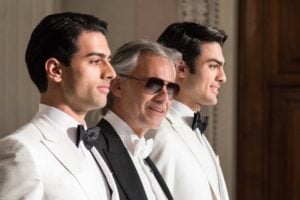 One such collaboration can be heard in Andrea’s recent album “Sí” where he and Matteo sing “Fall On Me” in both English and Italian.

Their voices are different yet similar, Andrea said explaining:

Technically they are very different, but there is one thing that makes them most similar: the attitude. That characteristic way of expressing yourself through your voice. This makes Matteo and I very similar. But that is something that you cannot learn, that cannot be taught. That is something you are born with. 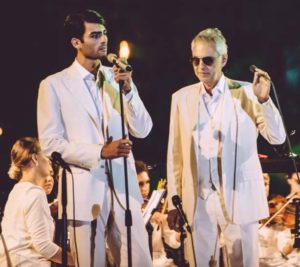 That similarity can definitely be heard in the video below. It features Matteo backstage earlier this year as he presumably warms up with a soulful rendition of Elvis’s 1956 hit, “Love Me Tender.” In fact, Andrea covered the very same song in his 2013 album, “Passione.”

In the video, Matteo is just 20 years old, and if this is what he sounds like now… well, wow. We can’t wait to hear what he does over the next few years!

Listen to this warm-up session below, and don’t forget to share this story to spread this wonderful young singer’s incredible talent.