As any custodian will tell you, school-age children tend to be messy, and if it weren’t for people like Eugene Hinton, teachers would arrive in their classrooms each day with overflowing garbage cans and desktops covered with unidentifiable stains.

So when third-grade teacher Andrea Orr summoned him to the cafeteria to clean up a mystery mess at Moody Elementary School in Moody, Alabama, he dutifully grabbed his spray bottle and mop and headed inside. But it was all a ruse, because when he walked through the doors, hundreds of students screamed in unison. 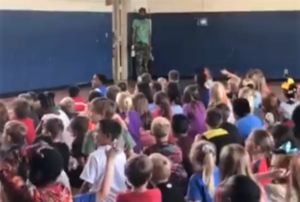 As you can imagine, he was completely taken by surprise and he even had to take a second to compose himself! 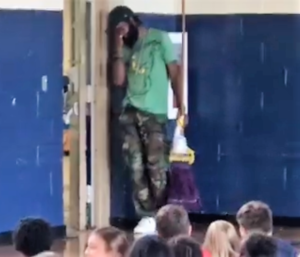 They launched the surprise on October 2, National Custodian Day, to thank “Mr. Eugene” for everything he’s done during his long tenure at the school. He’s friendly and courteous with all the staff members and frequently bumps fists with students as they cruise down the hallway, earning him a “superhero” moniker from the student body.

On his special day, the students showered him with gifts and cards, and even made a banner that says, “Thanks, Mr. Eugene, for always lending a helping hand,” decorated with lots of little hands! 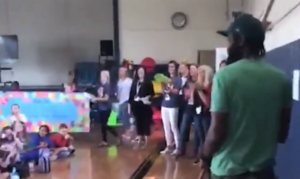 Andrea trailed in behind him when he walked in on the surprise and caught the touching moment in the video below. Being a custodian can really be a thankless job, so watching hundreds of kids show their appreciation is really hitting everybody in the feels. But maybe more importantly, Eugene himself.

“I totally lost it. I wasn’t expecting it at all,” he said.

Watch the sweetest display of gratitude in the video below, and share if you agree this was one well-deserved surprise!