Many die hard Disney fans have already seen the “Aladdin” film remake after its highly-anticipated premiere on May 24. But for those who need even more of their “street rat” fix, James Corden has quite the treat.

“The Late Late Show” host invited some very special guests to his latest “Crosswalk: the Musical,” a recurring segment during which Corden and his crew stage an elaborate musical production… in the middle of an active crosswalk in Los Angeles.

And of course, Corden couldn’t put on an Aladdin musical without the film’s biggest stars — Mena Massoud and Naomi Scott! 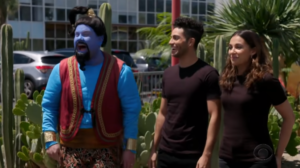 Massoud and Scott were, once again, cast as Aladdin and Jasmine. And Corden was already decked out, ready to play his favorite character — that is, until Will Smith himself showed up and took back his rightful role as the genie. 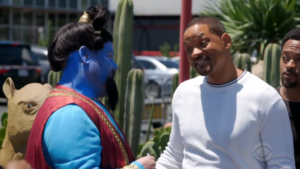 A reluctant Corden was relegated to playing Aladdin’s sidekick, Abu, instead, and being the diva he is, puffed up the importance of his role.

“‘Aladdin’ is, in many ways, sort of this one monkey’s journey from the backstreets of Agrabah to the highest seats of power,” Corden said with a straight face. “In fact, if you think about the great stage roles, it’s Hamlet, Willy Loman and Abu—the Monkey in ‘Aladdin.'” 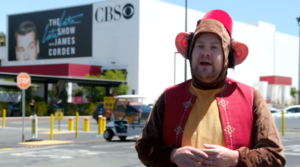 He also made sure to warn the cast to take one particular set of lyrics very seriously.

“Before we get out there on this magic carpet ride, I want to remind everybody that, ‘Don’t you dare close your eyes,’ is not just a wonderful lyric. It could also save your life. The traffic is real, and it is dangerous,” Corden added. 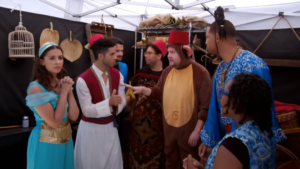 With that straightened out, the star-studded cast gathered at the intersection of Beverly Boulevard and Genesee Avenue to perform “Friend Like Me,” “Prince Ali,” and “A Whole New World.” They went all out with pyrotechnics and a forklift “carpet ride” before scuttling back to the sidewalks once the lights turned green. 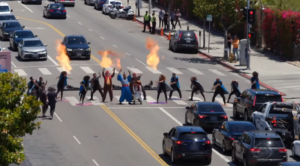 Some drivers honked their horns, annoyed at the disruption, while others sang and even climbed out of their cars to dance along to the songs. 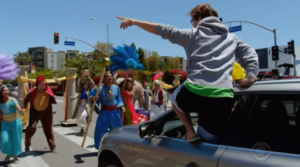 But in between the cast’s impressive performances, something became very apparent: Corden felt left out and deeply underappreciated. He even stormed off at one point. Fortunately, Smith brought Abu back with a pep talk, sealing the deal with a tasty banana. 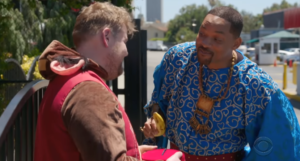 They ran into yet another snag when the forklift couldn’t move out of the street fast enough for the flow of traffic, but all in all, the mini Broadway production was a hit. In fact, delighted fans are saying this may be Corden’s best “Crosswalk” yet. 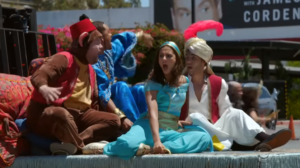 “I swear! NOBODY promotes tv shows/movies/music like the way James promotes them!” one viewer wrote.

Another added, “Every time a new crosswalk the musical comes out I always think ‘there’s nothing that will compare to this’… And then James always does that! Masterpiece.”

Check out Corden’s latest “masterpiece” for yourself below, and be sure to share with other Aladdin fans!