You’ll be hard pressed to find anyone who doesn’t like Fleetwood Mac, but apparently, fans of this iconic band aren’t limited to the human variety.

Victoria Anderson-Gardner and her cousin, Morningstar Derosier (pictured below), both hope to become filmmakers. They’re both studying film and went out on a shoot early last month for a documentary about indigenous youth participating in a tribal ceremony known as the Sun Dance. 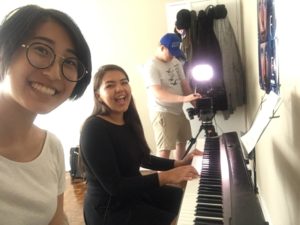 After they got their fill of dancing for the day (or so they thought), they packed their gear and headed on home. But at some point along the drive, they spotted this majestic horse, standing there by his lonesome, at the side of the road. You can’t blame them for wanting to pull over to say hello… 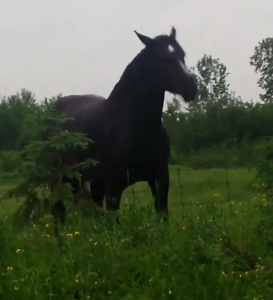 Fleetwood Mac’s 1977 hit, “Dreams,” happened to be playing at the time, and Victoria thought he’d appreciate a little serenade. You know, add a little spice to what was just another boring day out there grazing and flicking flies out of his eyes and whatever else horses do to pass the time.

So Morningstar cranked up the tunes and they started singing along with Stevie Nicks, and next thing you know, the horse caught the beat and started bobbing along!

Too bad he wasn’t around when the song first came out – he would’ve fit right in, weaving along with the rest of the backup singers! (Although, truth be told, he also would’ve stolen the spotlight.)

We started singing and then noticed the horse started to dance, so we turned the music up even louder! … We’ll definitely be looking out for the horse when we go back to see the Sun Dancers next year!

But some big questions remain: Does this Mr. Ed just dance, or can he sing, or at least lip sync, too? And does he only dance to Fleetwood Mac or could he bust a move to some ’80s-style rap just as well? Let’s hope we get answers to these burning questions at next year’s shoot.

In the meantime, watch this horse rock out in the video below, and share with another horse lover in your life today!