You won’t find a dog who loves tennis balls more than Finley Molloy.

The 6-year-old golden retriever is happiest when he has his jaws wrapped around one or more of the fuzzy green balls. In fact, he has a gift for holding a seemingly impossible amount! And recently, the sweet pup’s passion has turned him into an international star. 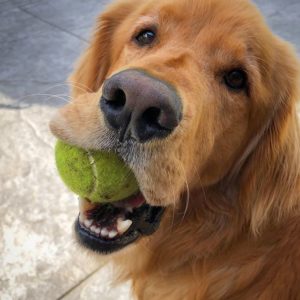 Finley lives with Erin Molloy and her parents in Canandaigua, New York. Erin started noticing his affinity for picking up tennis balls when he was 2 years old. Back then, he could only hold a few, but he’s since mastered holding six at a time! Erin couldn’t keep these silly antics to herself, so she created an Instagram account on Finley’s behalf so the world could appreciate him, too. 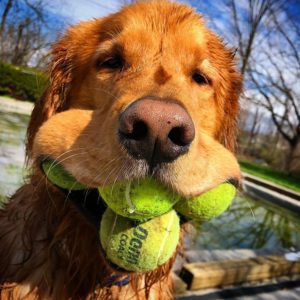 Finley’s followers are no strangers to his ball-holding talent, but Erin didn’t realize it was world record-worthy until online research revealed he’d broken one. A golden retriever in Texas set the Guinness World Record for holding the most balls at five in 2003, and this year, Finley was officially recognized as the new record holder at six! 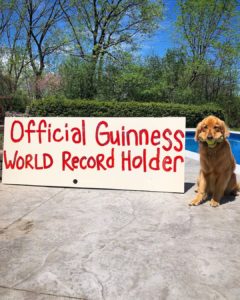 The good boy received an outpouring of love and support from his loyal fans, who couldn’t be happier for him!

“A lot of the messages were like, ‘We’ve been following Finley’s journey to the world record for so long, this is so well deserved, so happy you finally got it,'” Erin told USA Today. 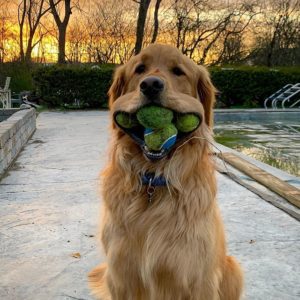 The Molloys celebrated with a backyard party — and a tasty cake for Finley! While they’re thrilled by their dog’s unique achievement, they’re also touched to hear it’s spreading joy throughout their community of dog lovers.

“It’s lifting people’s spirits more than we had ever expected or hoped for, which is really fulfilling,” Erin added. “And it’s really rewarding knowing that something as simple as a good boy is making people smile all over the world.” 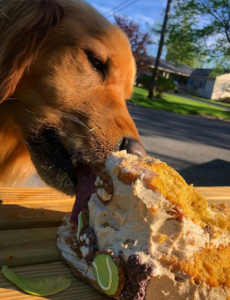 But despite all the attention, Finley won’t be letting his newfound fame go to his head. The adorable goofball is focused on what really matters: his love affair with his favorite thing in the world.

Congratulations, Finley! May you never go a day without your beloved tennis balls. We’ll leave you with one of the cutie’s training sessions below, which is sure to make you smile. Share with others to keep the smiles coming!