Second chances are never guaranteed in life. That’s why when we do get them, we have to put in everything we have to make them count.

Darci Lynne Farmer certainly understands the significance of getting another shot. In 2017, the Oklahoma teen won season 12 of “America’s Got Talent” with her unbelievable combination of singing and ventriloquism skills. But when she came back on the spinoff series, “America’s Got Talent: The Champions,” she was, unfortunately, eliminated in the second episode. 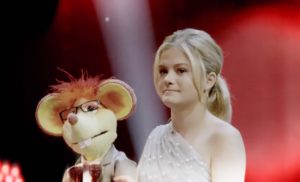 Darci was initially crushed. “The chance of winning that title was gone,” she said. You can imagine how excited the 14-year-old was, then, when she was later invited to return to the show as a wild card — her second chance!

This time, she pulled out all the stops, bringing along her “lucky charm,” a bunny named Petunia that helped her win the first time around. She also had a wild card of her own to pull out… leaving both the audience and judges totally astonished. 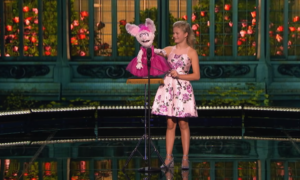 Clearly a fan favorite, Darci received a warm welcome of applause from the audience as she stepped out onto the stage, her confidence on full display. “Petunia, what are you going to sing today?” she asks the puppet.

“Well, I want to sing Italian opera,” Petunia answers as Simon Cowell’s eyes go wide. The judges had no idea Darci could sing opera, let alone do it while barely moving her lips. The genre is notoriously difficult to perform on its own but through ventriloquism? It seems almost impossible. 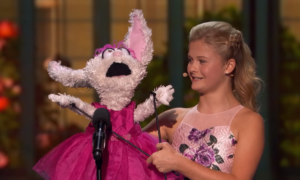 But Darci was there to prove herself, after all — and boy did she! Through Petunia, the teen ventriloquist sang the soprano aria, “O Mio Babbino Caro” beautifully, showcasing an incredible vocal range for someone whose mouth is basically shut.

Just seconds into her performance, the audience rose, giving her a well-deserved standing ovation.

The judges gave her one too, as she finished up, stunned by the teen’s astounding talent. 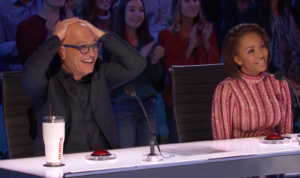 “This, for so many reasons, is your best-ever performance,” Cowell gushed. “I think you may win tonight.” “You deserve everything and much, much more,” Mel B. added. “You’ve gone through a whole season of AGT and you still surprise!” Howie Mandel said.

It’s hard to believe Darci hasn’t had any professional coaching; the girl is completely self-taught! That’s what makes her such an amazing contender. She may have been eliminated before, but she’s definitely earned her spot back on the show. We wish her the best of luck in the finale!

Check out Darci’s awe-inspiring performance below, and be sure to share her talent with the world.