You know that old saying, “kids say the darndest things?”

Nobody understands the strange and ridiculous things that come out of small children’s mouths better than their parents — case in point, Jeremy Rupke. The Canadian dad from Northern Ontario recently gifted the world with a gut-busting video of his son, Mason, at hockey practice. It gave viewers a peek into the inner workings of a four-year-old’s mind…which, funnily enough, many adults found extremely relatable. 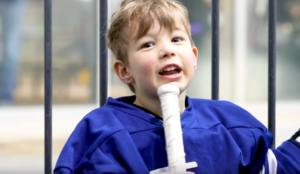 On Feb. 22, Jeremy, a hockey coach, shared the footage on Twitter and YouTube, writing, “I mic’d up my four-year-old at Timbits Hockey so I could finally understand what the heck he was doing out there. It was… interesting.” That last part turned out to be a major understatement. 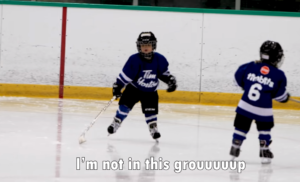 During the six minutes of pure hilarity, we see Mason struggling, rolling, and sliding around on the ice, muttering to himself and spilling out his innermost thoughts in a giggle-worthy stream of consciousness. 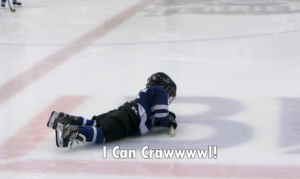 As the tiny comedian continuously drops onto the ice because of his “tired legs” and flails around, he holds nothing back, giving commentary on everything from his ability to crawl to his desire for everyone to take a nap. 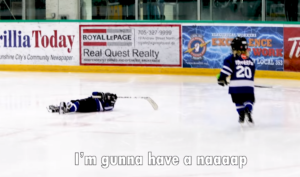 He also keeps viewers updated on the critical countdown to the end of practice, when he can finally live out his dream of going to “BaDonald’s” (McDonald’s) with his dad. 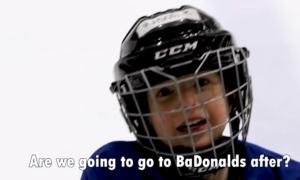 Mason even picks a fight with an invisible person, calling them an “old fat can.” Other notable utterances include Mason’s need “to go pee” and straight-up animalistic babbling. 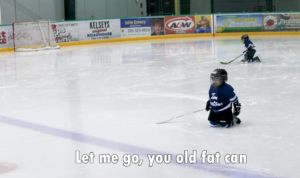 Unsurprisingly, Jeremy’s video went on garner millions of views. Thousands commented to express their love for the adorable hockey player, adding they feel the same way he does pretty much every day. 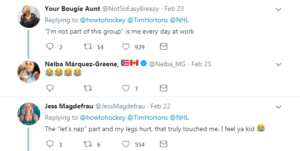 Ah, to be a four-year-old (with the attention span of a goldfish) again. Check out Mason hamming it up at practice in the video below, and share with other parents to give them a laugh.