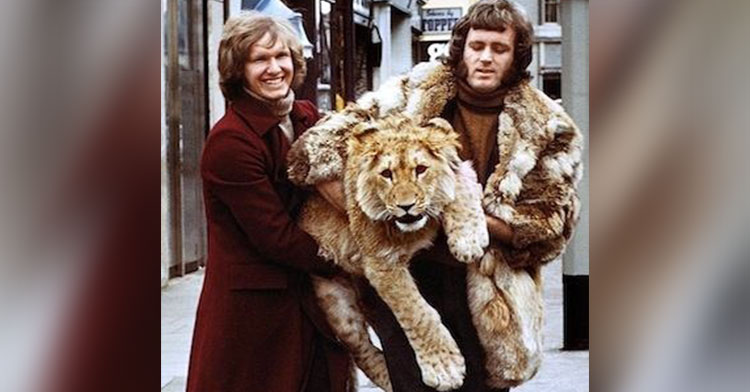 The Story Of Christian The Lion & His Rescuers Proves F...

Back in the late 1960s, John Rendall and Anthony “Ace” Bourke were two free-wheeling Australians who did what everyone else their age did after graduating from college — move to London.

It was a big change from the rural areas they were used to, and they especially loved stopping by the world-famous Harrods to see the variety of things for sale —  including a variety of exotic animals. It was there that they spotted a 3-month-old male lion cub. 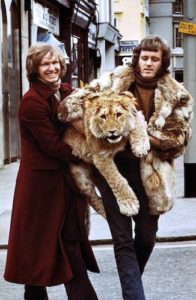 “I was pretty shocked to see this animal, even if it was 3 months old, in this tiny cage: ‘This isn’t right. We really have to do something about this,’” John recalled. “And right there [we] decided to buy him.”

The two men pooled their money and bought the lion, who they later named Christian, for about $4,600 in current dollars. They brought him back to their apartment where he lived for the first year.

He was already massive at that young age, and of course, continued to grow until the “house cat” was so squeezed into his digs that he later took up residence in the basement of the men’s furniture store.

All the while, Christian took a liking to various hobbies, including his favorite sport, soccer, and rode in the back seat of their Bentley as they headed to restaurants and other outings. 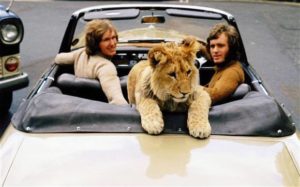 But John and Anthony soon realized it wasn’t practical, or fair, to keep a full-grown lion in the heart of London. Months later, they were connected with a Kenyan conservationist, George Adamson, who had experience reintegrating animals back into the wild. Thanks to him, Christian was eventually released into Kenya’s Kora National Park.

Naturally, John and Anthony kept in touch with George and after some time, they decided a reunion was in order. They returned to Kora in 1972, and by this time, Christian had friends from his own species. George warned the two men that he probably wouldn’t remember them, but the footage in the video below, released nearly 40 years later, proves otherwise. 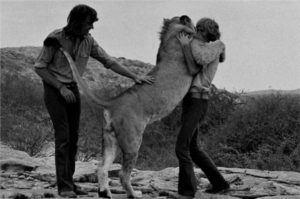 The months marched onward, and George eventually got back in touch with the two “foster dads,” telling them he hadn’t seen Christian in months. By this time, he was the head of his own pride, and maybe he was just too busy keeping his harem in line? Wanting to make sure everything was alright, John and Anthony arranged another trip to Kora, hoping to lure their old friend out one last time.

And the strangest thing happened: As if sensing his friends were on their way, Christian suddenly appeared, George said, sitting on a rock outside his camp awaiting their arrival. 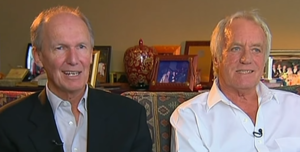 John and Anthony had no idea how popular the video of their first reunion had become until just recently, and they couldn’t be happier: “If it’s made people more aware and more interested in conservation and the protection of the environment,” John said, “we’re very pleased.”

In the video below, Christian spots his old friends from a distance and slowly walks toward them, cautious and on full alert. But he changes dramatically and almost instantaneously as soon as he recognizes them, and your heart will absolutely melt from that moment on!

Share if you agree some friendships are for life.