We love dogs for so many reasons. They’re super cute, obviously, and they’re the most loyal companions.

While both describe this sweet beagle-basset hound mix, that’s not the reason why he’s capturing hearts across the internet. It’s because he’s got a very unique talent — much like that of his owners’ favorite singer. 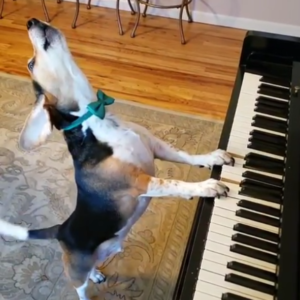 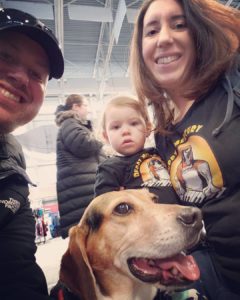 When Laurie and Glen first brought Buddy home a few years ago, they noticed something peculiar about the pup. He was fascinated by their piano, and eventually began standing up on his hind legs in front of it and pressing the keys with his paws. Then, he’d tilt his head back and howl along to the notes. Laurie and Glen swear they never taught him this; he started doing it all on his own. 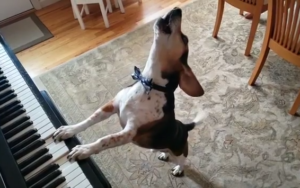 The Wolfes got a kick out of Buddy’s musical antics and started sharing videos of his performances online, where Buddy instantly became a viral sensation. His adorable concerts bring smiles to millions of faces and elicit countless “oohs” and “ahhs” — especially when Buddy’s “backup dancer” joins in. 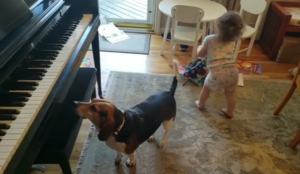 In one of Buddy’s most popular uploads, precious Eve can be seen clutching a toy guitar and bumping her tiny hips from side to side as her furry brother taps the piano keys and howls his little heart out. 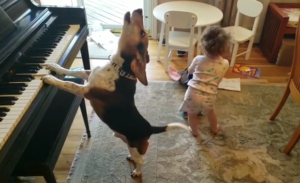 These two are well on their way to becoming one of the cutest bands ever (if they aren’t already), and viewers wholeheartedly agree. 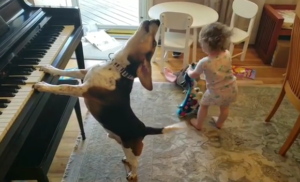 Pointing out Laurie and Glen’s luck, one viewer wrote, “Super talented Buddy & baby! You have a dog prodigy & a baby dancer…what could be more exciting?”

“These two are way too CUTE! They both really know how to party!” another added. 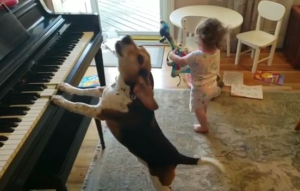 If you’re like us, you could watch these two jam all day. That’s what the Wolfes want from the public, but it’s not because they’re trying to become famous. They’re hoping Buddy’s videos will spread awareness about animals who need good homes.

“We want to help more animals get rescued,” Laurie said. “We only have so much space in our home.”

Do them a favor by watching Buddy and Eve’s jam session below, and share to help encourage others to adopt homeless animals.