Children tend to feel one of two ways about going back to school after the summer break. Either they’re thrilled to see their friends and classmates again, or they’re dreading that first day back.

Unfortunately, not every kid has an easy time fitting in with their peers. Some are targeted by bullies at school, making that return to the classroom anything but fun. That’s what inspired six-year-old Blake Rajahn’s back-to-school mission. 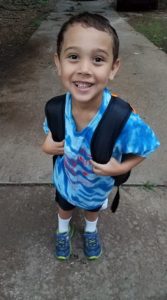 The six-year-old from Fayetteville, Georgia, has experienced bullying himself, and knows how having just one person in your corner can make all the difference. This year, he was determined to make sure no other child felt alone at North Fayette Elementary — and his creative solution has thousands cheering.

Blake is the oldest of four in a family of six, and as such, also wants to set a good example for his younger siblings. His mom, Nikki, runs a small business called Unfading Adornments. She customizes clothing and home goods with personalized sayings. Before Blake went back to school, Nikki offered to make him a custom shirt for his first day. And the five words he chose touched her heart. 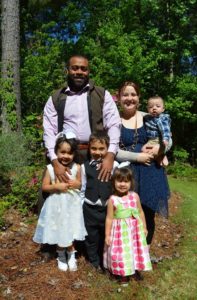 “It could have anything- a basketball theme, football, etc. which are all his favorites,” Nikki wrote in a Facebook post alongside a photo of Blake in his new shirt. “He thought a while and said, ‘will you please make me a shirt that says ‘I will be your friend’ for all the kids who need a friend to know that I am here for them?’ Never underestimate your kid’s heart for others!” 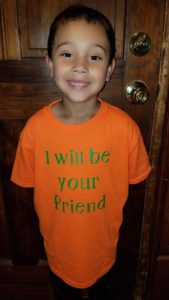 The post went viral, and soon after, hundreds of positive messages began flooding in. Many even wanted their own “I will be your friend” shirts! So Nikki began selling more for $15, but to her, it wasn’t profit-driven. In fact, she’s been donating a portion of the proceeds to local church charity Real Life Center, which offers a variety of services to people in need. 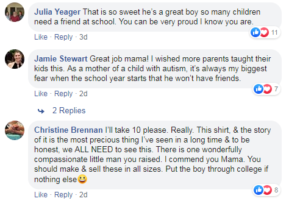 As for Blake? He couldn’t be happier with the response. When Nikki told him she was selling shirts with his message printed on them, he said, “Oh good! Now more and more people are going to have more and more friends!”

The little boy’s first day of school was today, and we’re sure he’s already made plenty of new buddies to play with. Everyone deserves a friend as thoughtful as Blake, so please share this story to spread his idea.