When you’re a hands-on mom like LaCora Johnson, spending a year away from your kids feels like an eternity.

LaCora is an Army Specialist who was deployed to Kuwait with the Army National Guard Reserve. She spent an agonizing year away from her four kids, so when the day finally arrived that she could come home she knew she wanted to make it a surprise they’d never forget. 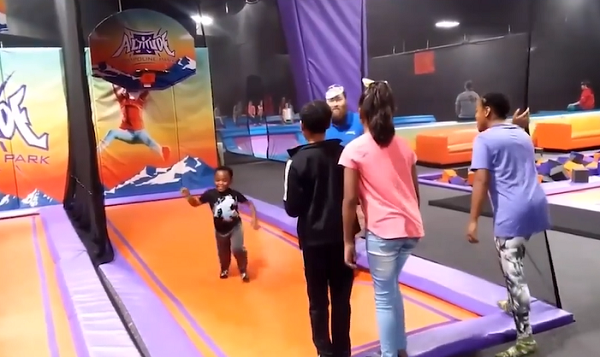 LaCora’s kids Laina Boles, LaKrista Boles, Paris Boles, and Gabriel Johnson were spending a few hours at Altitude Trampoline Park one afternoon when suddenly they heard their names being called out over the P.A. system. The kids thought they’d been invited to attend a special basketball shoot-off, but in reality, LaCora was hiding in a room nearby waiting to surprise them.

As the kids played, a friend recorded the moment their mom approached them from behind. The look on her oldest daughter’s face is absolutely priceless, and she immediately lets out an ear-splitting shriek. 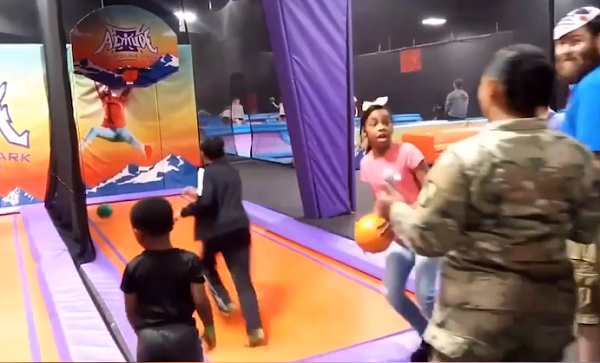 It’s a good thing they’re in a trampoline park with padded floors because once they spotted their mom the kids immediately tackled her to the ground! Smothering her with kisses, all five of them roll around on the floor in fits of joy and laughter. A minute later, one of her sons soon stands up and stands there quietly sobbing into his hands. He’s completely overcome with happiness at the sight of his mom!

LaCora says she has finished her service to the United States Army and is thrilled to be able to stay home and love on her kids full-time now. It seems her children couldn’t be happier about this arrangement, making all those long months without her worthwhile. 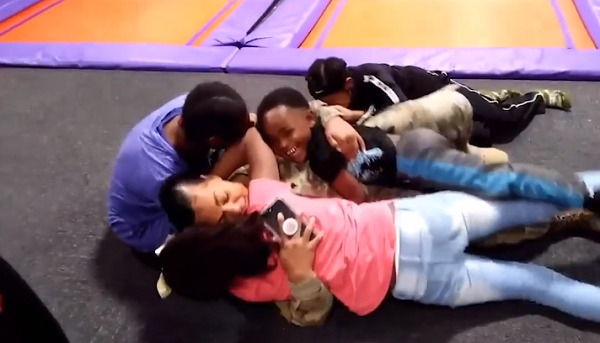 Thank you for your service, LaCora! We know how difficult it must be to leave your family behind in order to perform service to our country, and we appreciate your sacrifices from the bottom of our hearts.

Watch LaCora’s joyful reunion with her kids in the video below, and don’t forget to share.