Remember the time a teenager noticed a couple fighting at a bus stop so he pretended to befriend the man to keep an eye on them? He stayed with the couple for hours until the man finally stepped away for a cigarette; that’s when the woman revealed she was being kidnapped! Similarly, two teenagers saved another kidnapped young woman when they spotted her in the car. She had to mouth “help me” in order to express that she was in dire trouble.

While the women in these stories were able to get their message across eventually, they both could have benefited from having a secret code to communicate their distress sooner. In order to provide this code for their patrons, a bar in St. Petersburg, Florida called the Iberian Rooster came up with a drink called “angel shots.”

The idea is simple. If– for whatever reason– you need help escaping your date, just order an angel shot and the bartender will come to your aid.

every restaurant needs to have this in the women’s restroom pic.twitter.com/vvsE6NLWqK

In a time when more and more people are meeting online and through dating apps, angel shots are a great way to provide security. Because– while apps like Tinder and Bumble can definitely be a good thing– they can also lead to unsafe situations if your blind date turns out to be someone other than who he says he is.

But this idea isn’t just in the United States.

A photograph of a poster in the women’s restroom at a bar in England recently  went viral on social media with a similar idea. The poster– created by a rape crisis support service– suggests women feeling uncomfortable “ask for Angela” in order to discreetly get help.

i saw this in a toilet and thought it was important and should be a thing everywhere not just lincolnshire !!!! pic.twitter.com/oO45I7gaJL

Other bars have followed suit, coming up with their own code words to make their patrons feel more secure. 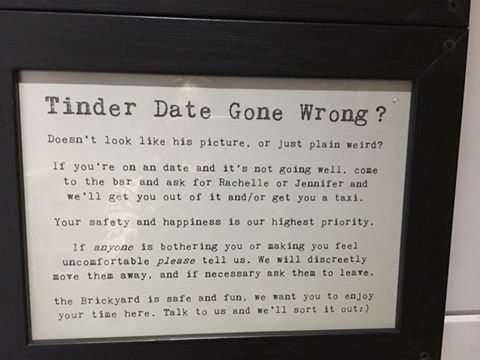 It’s so amazing to see these establishments thinking creatively and putting their customers’ safety and comfort first.

The representation of women in the STEM (science, technology, engineering, and math) field has long been an area of great need. According to the U.S. Census Bureau, women made up only...

Cops Go Above And Beyond To Celebrate Newest “Deputy,” A 5-Yr-Old With Cancer.

Officers at Manatee County Sheriff's Office in Florida have gone above and beyond to encourage one little boy who is fighting for his life. Jeremiah is only 5 years old,...