No matter what our differences are, everyone loves a good festival.

A South American band is capitalizing on that common denominator to bring people together and “create spaces in which everyone is accepted, regardless of the differences that make us unique.” Whenever AAINJAA blows into town, people forget about their differences and flood the streets to enjoy the festival-like atmosphere they inspire! 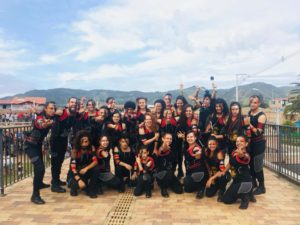 Musical ensembles usually consist of a couple dozen members at most, but AAINJAA takes the concept of a performance to new heights. The band’s based in Bogotá, Colombia, and has more than 100 members! This incredibly talented group uses drums of all shapes and sizes, shakers, and tambourine-like instruments to infuse crowds with happiness and joy. 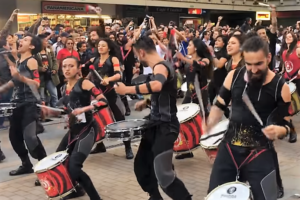 The video below was uploaded to YouTube last summer and has nearly 20 million views — not at all surprising considering you can almost feel that infectious energy flowing out of your screen. The style of music they’re playing is called batucada, a repetitive, fast-paced cacophony of percussion instruments with influences from Africa and Brazil.

Their performance style fuses music with dance. As the massive group plays their respective instruments, they incorporate elaborate arm movements that mimic waves, throwing in head-spinning hair flips that make the routine look even more difficult.

And frankly, you know you’re doing something right when people are sitting on their friends’ shoulders to get a better view and everyone has their phones out to film your performance! 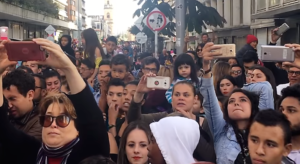 Roughly translated from the indigenous Wuayuunaiki language of the region, AAINJAA means “to do, to elaborate, to manufacture, and to build.” The band’s founder, Homero Cortez, found that to be a pretty apt description for what his budding band aimed to do, and they’ve been performing under that name since the spring of 2013.

With roughly 1,000 members between Bogota and Medellin, his attempts to brighten the world are most definitely spreading!

Want to see them in action? What are you waiting for — click below to see an example of the kind of mass happiness they’re working to create, and share to spread their talent!