Connie Willhite only wanted two things before he passed away from this life – to take one last fishing trip and to be baptised. The Georgia native and Vietnam Veteran was being cared for at the Hospice Care Unit at the VA medical center when he made his request known to staff – and they decided they would do everything they could to make it happen.

Greg Senters, Willhite’s primary caretaker, went above and beyond to ensure his dying wish came true. Senters helped the Veteran plan his last fishing trip and even went so far as to buy all the bait and gear. He then took Wilhite to a small lake located behind the medical center and the adventure began. 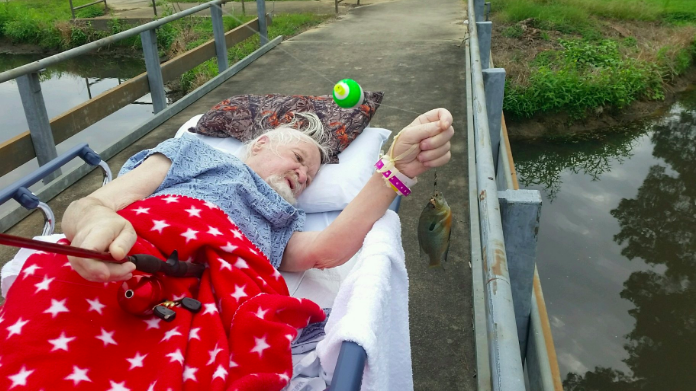 There was no guarantee Willhite would catch fish  that day, but he was undeterred. “It’s called fishing, it’s not called catching. So I told him we may not catch anything, but he said it doesn’t matter,” Senters said. “He said just being out there doing this was just as good.”

Senters said that in those precious hours spent fishing “the cancer and everything else went away, and what you see is that precious few moments of someone really enjoying life.”

The moment was made even sweeter when Willhite actually caught a small fish, completing his final requests to perfection.

Lisa Kittrill, Willhite’s cousin, said the Vietnam Vet was a light in their family and is so grateful his final days were full of fun and christened with hope.”He talked and talked when I came in that day, and said he went fishing and got baptized, and for that I’m so glad,” Kittrill said.

After a long and fulfilling life, Connie Willhite died peacefully on August 29th.